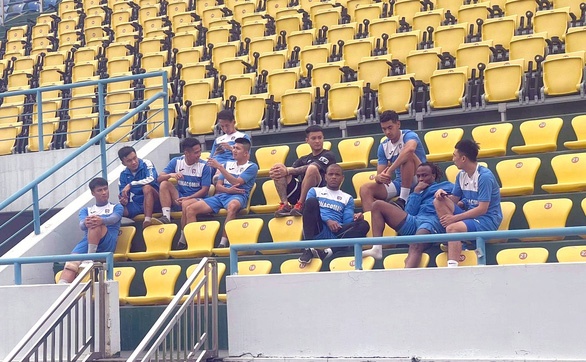 Ten of the team’s players refused to take to the field during practices on Tuesday afternoon, choosing to sit in the stands instead.

“We haven’t been paid our salaries, facilitation payments, and bonuses for the past seven months,” one player told Tuoi Tre (Youth) newspaper.

“We understand the difficulty of the club, but we need money to live and support our families.

“We’ve spent almost all of our savings over the past several months.

“Some of us have even had to borrow from our families.”

Frustration over missing salaries has been brewing amongst the team for quite some time.

“We had been thinking about going on strike for a long time but chose to wait patiently,” the player explained.

“Though the entire team haven’t been paid, we didn’t want to drag the young players into this so we asked them not to join us in the strike.”

As a result, Than Quang Ninh FC, based in the namesake province in northern Vietnam, have just a few players preparing for their match against Becamex Binh Duong FC on April 3.

According to the player who spoke to Tuoi Tre, a Quang Ninh Province official and a club representative have negotiated with the players and have promised to pay them “in the next one to two days.”

Since Vietnam National Coal – Mineral Industries Holding Corporation Limited, the club’s main sponsor, backed out two years ago, the team have been mired in financial hardship.

In December, the People’s Committee of Quang Ninh agreed to provide financial support, and the situation seemed to be improving until several key players and the head coach became so frustrated that they quit the club shortly before the 2021 V-League 1 season started in January.

With only rookie players left to fill the gaps, the team managed to exceed expectations and place second in the league table with 12 points, just one behind leaders Hoang Anh Gia Lai FC, after the first six rounds.

According to Pham Thanh Hung, the club’s chairman, provincial authorities are expected to hold a meeting with the team on Thursday to resolve the issue.