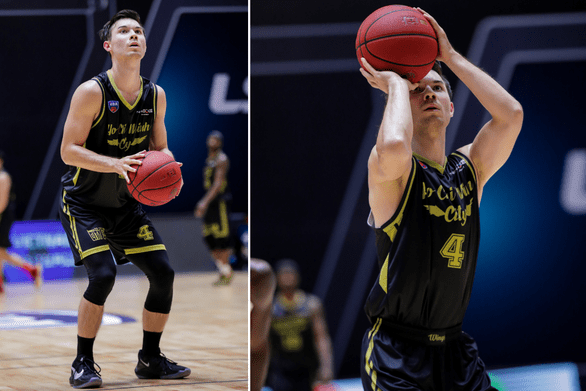 In Game 28, many expected that Saigon Heat would have an easy victory as foreign player Makinde London of Ho Chi Minh City Wings was suspended due to an unsportsmanlike foul on Sang Dinh in the previous match against Hanoi Buffaloes.

However, with an impressive performance of 32 points and a 100-percent successful free-throw rate in 14 goals, Vietnamese-born player Vincent Nguyen challenged the stars of Saigon Heat.

Despite the pressure of a constant point difference to the Heat, coach Erik Olson’s players kept high spirits under the lead of this Vietnamese-Dutch star to showcase a non-stop point chase after their opponents until the last minutes.

Vincent Nguyen was so good that he almost stole the victory from the champions.

This is not the first time Vincent Nguyen has achieved a 100-percent free-throw efficiency as at the 2017 VBA, he accurately finished all nine free throws, helping Hanoi Buffaloes defeat Ho Chi Minh City Wings.

Ho Chi Minh City Wings had a bad season at the 2020 VBA, when they ended bottom of the ranking table with only three victories after 12 games.

However, the Wings took the VBA Premier Bubble Games – Brought to you by NovaWorld Phan Thiet by storm with four wins against such strong teams as 2020 runners-up Thang Long Warriors and Hanoi Buffaloes.

It is safe to say that the key to Ho Chi Minh City Wings’ transformation is Vincent Nguyen.

With the experience of competing at the VBA since 2017, Vincent Nguyen’s capacity has reached the level of a foreign player in the position of a defender.

With his contribution, it looks like Ho Chi Minh City Wings has three foreign players in the squad.

It was Vincent Nguyen who performed a classy long shot that brought three points in the last second to help the Wings defeat Cantho Catfish in Game 14.

Besides, the experience of coaching the youth team of Ho Chi Minh City Wings Club also makes Vincent Nguyen an important bridge to help teammates improvise flexibly according to the intentions of coach Erik Olson.

Game 25 of the VBA Premier Bubble Games – Brought to you by NovaWorld Phan Thiet was a derby between Ho Chi Minh City Wings and Saigon Heat.

Although there was a time when the score was equalized at 85-85, the tenacity of Ho Chi Minh City Wings could not defeat the bravery of VBA champions Saigon Heat.

As usual, Daquan Bracey was named Most Valuable Player (MVP) of the game with 30 points, ten rebounds, and seven assists.

Administrator - 14 August, 2020 0
The lack of a regulated process to recruit young talent has caused football academies in Vietnam to step on each other’s toes, obstructing their training and development.

Things you should know: FIFA Mobile Tips and Tricks

Administrator - 3 June, 2020 0
The mobile version of the wildly popular EA game was released in 2016. The game is available on iOS and Android and free to download, with plenty of opportunities for in-game purchases. The game is self-standing and has had massive success with thousands of players playing matches on the go.