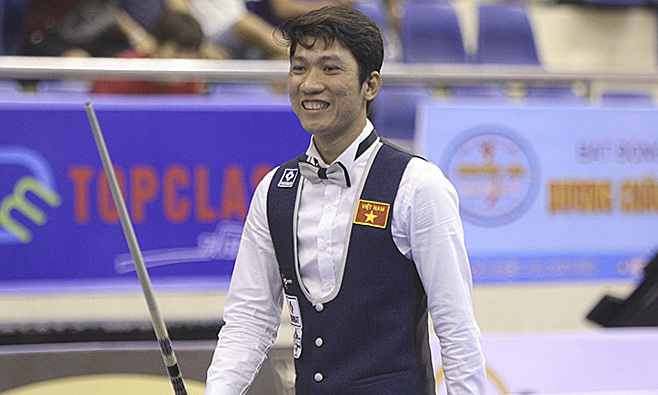 He beat number one seeded Belgian Roland Forthomme in an intense final. Nai (25th in the world) and Forthomme (20th) went back and forth, the latter scoring seven consecutive points to lead 14-8, before extending the gap to 21-12. In answer, Nai scored eight points to total 20, while Forthomme stood on 24.

In his 10th round, Nai scored another eight points in a crucial shot to make it 39-33. Forthomme later scored another seven to push the score to 42-43. Next, Nai missed scoring a title-clinching seven points, but capitalized on Forthomme’s mistakes to win 50-46 after 17 rounds.

The UMB Virtual One Carom Challenge is hosted from September 14 to 18. This is the third challenge this year. Two players use their home or club table and play a virtual match to 50 points, every inning starting with the break shot.

Watch the full final of UMB Virtual One Carom Challenge:

Administrator - 1 September, 2020 0
Le Cong Vinh's goal in the 2007 Asian Cup made it past the round of 16 in the Asian Cup Greatest Goals Bracket Challenge.

Administrator - 19 March, 2020 0
Small but lethal ‘Little Chicken’ Nguyen Van Duong has become the first ever Vietnamese featherweight boxer to qualify for the Olympics.