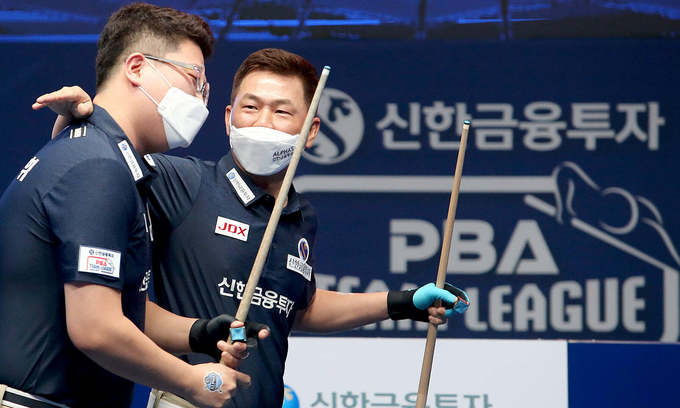 Ma Minh Cam and teammates finished first at the Professional Billiards Association (PBA) Team League 2020-2021 that wrapped up in South Korea on Monday.

A total of six teams, each with five-seven cueists, competed in the five-day tournament held behind closed doors. The 45-year-old player Cam was playing for the Alphas team, alongside South Korea’s Jun-ju Shin and Ga-young Kim.

Cam’s team had a strong start finishing in first place after the first three days, but lost 0-4 to Raon team on the fourth day, reducing their chances to win the championship, since they could have lost by score differences if they ended up tying with the first place team with seven points.

The team finished its sixth and last round with a 3-3 draw against a third ranked rival team, Heroes, which helped Cam’s team to scoop the first place with eight points, winning a cash prize of around $85,000 and boosting him to third place afterward in the PBA’s world rankings.

The Phoenix team also got eight points but was pipped at the post by a lower score difference. Cam had also attended the PBA Opening Tour SK rent-a-car Championship in July, also in South Korea, finishing fourth to win $8,400.

He had won the one-cushion carom trophy at the 2019 Asian Carom Billiards Championship in HCMC by beating South Korean’s Seo Hyun-min 100-51.

Administrator - 27 July, 2020 0
A man cried throughout his 21 km VnExpress Marathon Quy Nhon run Sunday, told at the very start that his ailing mother had passed.

Administrator - 7 May, 2020 0
Nguyen Quang Hai has been chosen as one of five best left footers to play in the Asian Football Confederation (AFC) Cup.