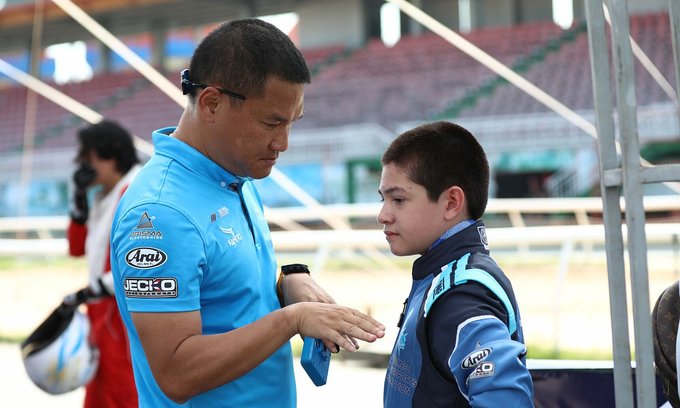 Alex Sawer of TrippleX Karting topped older opponents to win the solo category of ‘Be Fast or Be Last’ Go-Kart Cup 2020 in southern Vietnam.

The 12-year-old finished first in the sprint category. Before the Sunday race, not many people thought he would win first place since Sawer had only been go-karting for one year, with this his first ever race. However, the boy stunned everyone with his skill and execution on the track.

Sawer led the race right from the start and kept his advantage until the end. Nguyen Anh Tuan of CD KingDrag finished second and Cao Vietnam (Vietstar) third.

In the team endurance category with a duration of two hours and a distance of 150 km, three racers of Sobek Myride Academy finished first, while the Favorite Racer prize went to Henry Vig Nguyen.

Over 500 spectators were present at Dai Nam racetrack in Binh Duong Province to watch the event. Over 100 participants, including pro and semi-pro racers, competed in two categories – sprint and endurance. The sprint category had 20 racers and endurance 24 teams, with three to four people in each.

The race was hosted by Formula Racing Vietnam (FRV), the only unit in the country to host go-kart racing tournaments. Back in May, FRV organized a one-hour endurance race. They had decided to double the duration this time.

At international tournaments, endurance races usually last much longer, up to 24 hours over a total distance of 1,500 km.

Administrator - 27 January, 2021 0
2020 is a tough year for Vietnam, yet the economy has reaped remarkable achievements. Experts have been optimistic about Vietnam’s economic growth in 2021.

Vietnam up one place in FIFA ranking

Professional golf to tee off Vietnam return next week

Administrator - 11 October, 2020 0
The October 16-18 FLC Samson Championship marks the return of domestic professional golf to Vietnam after an eight-month hiatus caused by Covid-19.