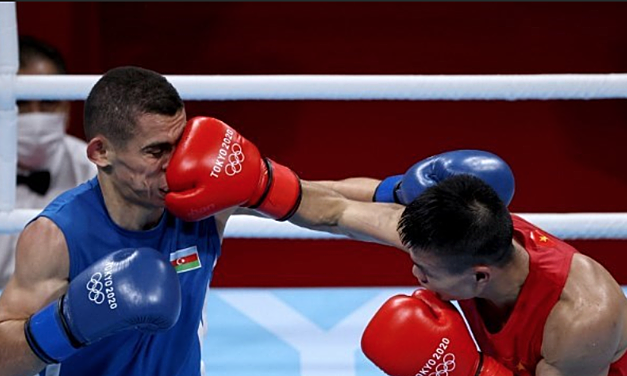 Nguyen Van Duong (R) throws a right hook at Alyev Tayfur in an Olympics boxing match in Tokyo on July 24, 2021. Photo by AFP.

Duong entered the match with confidence but, in the first round, suffered Tayfur’s effective dodges. At the end of the round, Duong threw a heavy right hook into Tayfur’s face. The Azerbaijani boxer floored and the referee had to count, though he got up.

However, Tayfur ended the first round with a higher score than Duong. After the coach adjusted his strategy in the second round, a fired-up Duong landed a series of accurate strikes to win the round.

In the decisive third round, a tired Duong allowed Tayfur to dominate, despite a few right hooks. By the end of the round, a prematurely celebrating Tayfur seemed confident of victory.

However, when the total score was announced, Duong turned out the winner. Three referees had given Duong 29 points each, while the other two handed him 28. Tayfur got two 29s, two 28s and one 27.

Duong will encounter his next bout against Mongolian boxer Erdenebat Tsendbaatar on July 28.

Administrator - 22 September, 2021 0
The Vietnam Football Federation (VFF) has called on the International Federation of Association Football (FIFA) and the Asian Football Confederation (AFC) to step up their inspection and assessment of the quality of referees as it complained about a decision in Vietnam’s latest World Cup qualifying game against Australia.

Administrator - 22 September, 2021 0
A number of cities and localities nationwide, including Ha Long, Vinh Phuc, and HCM City have begun reopening tourism services in an effort to welcome the return of domestic tourists in the aftermath of the latest wave of the COVID-19 pandemic.