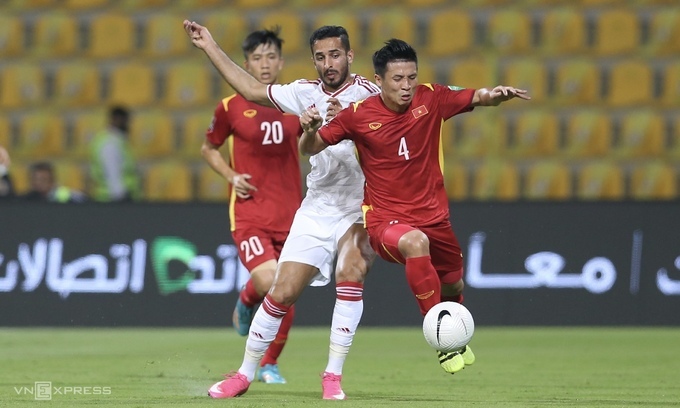 Vietnam (in red) play the UAE at the World Cup qualifiers on June 15, 2021. Photo by VnExpress/Lam Thoa.

The UAE and Vietnam might be in the same group once more in the final round of World Cup Asian qualifiers.

The final round classifies the teams based on their FIFA rankings, putting Vietnam in the last tier with Lebanon. Teams in the same tier will not be in the same group, therefore, excluding Lebanon, Vietnam may clash with the other 10 teams that are Japan, Iran, Australia, South Korea, Saudi Arabia, UAE, Iraq, China, Oman and Syria.

In tier four are China and Iraq. Although China are declining on form, they won all previous six encounters with Vietnam. For Iraq, Vietnam only drew one and lost three of their matches.

Oman and Syria are in tier five. Syria topped their group in the second round while Oman advanced as one of the best second-placed teams, the same as Vietnam.

Tier one and two boast the top teams in Asia: Japan, Iran, Australia and South Korea. Facing any of them would be a challenge for teams in other tiers.

The final round of World Cup Asian qualifiers will take place between Sept. 2, 2021 and March 29, 2022. Twelve teams in the final qualifying round will be divided into two groups of six, with the top two teams in each group qualifying directly for 2022 World Cup in Qatar, while the two third-placed teams enter the playoffs.

Video Assistant Referee (VAR) technology will be used in all 60 games of the final round, including 10 matches of Vietnam.

The draw for the final round is set to take place on July 1.

Tan Thanh Pagoda – a spiritual boundary marker in the north

Administrator - 28 May, 2020 0
Thirty seven young athletes have been hospitalized with food poisoning after eating dinner at the Son La Sports Training Center.