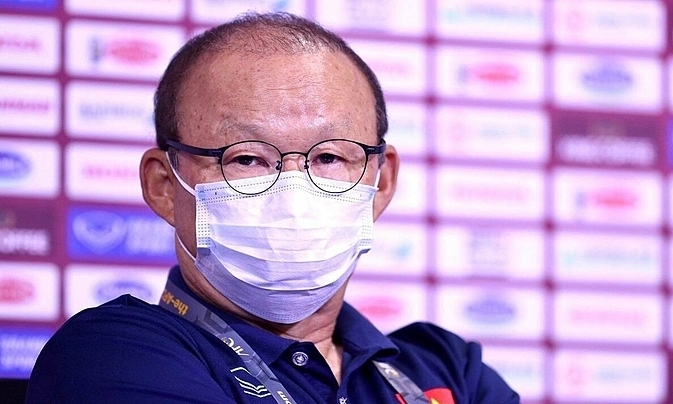 Coach Park Hang-seo speaks at a press conference ahead of the World Cup qualifier between Vietnam and Malaysia, UAE, June 10, 2021. Photo by VnExpress/Lam Thoa.

Coach Park Hang-seo affirmed that Vietnam are super focused on the decisive match against Malaysia in the World Cup qualifiers on Friday night.

“We all know the importance of this game with Malaysia. Therefore, we are trying our best to help the players prepare well, physically and mentally. I don’t want to put any pressure on the players. I just want them to play confidently. I believe they will bring a good result,” Park said at the pre-match press conference on Thursday.

After six games, Vietnam went unbeaten and stayed on top of group G with 14 points, while Malaysia have nine points. Their game on Friday is a crucial one because no one wants to fall behind on points. Vietnam need four more points to advance while Malaysia have to win both of their remaining games.

When two teams met at the World Cup qualifiers in October 2019, Vietnam defeated Malaysia 1-0 thanks to a goal by Nguyen Quang Hai. That was the third win out of four encounters between two teams since Park became Vietnam’s head coach in 2017. The other game ended with a draw.

However, Malaysia have had major changes to the squad since, especially the addition of several naturalized foreign players.

“Malaysia already had a naturalized player in their squad when we played them in 2019, and now they got three more, Dion Cools, Guiherme de Paula and Samuel Somerville. I think using naturalized players will help them plenty. These players came from Brazil and Europe so they have a great physique,” Park said.

After playing Malaysia, Vietnam still have a tough game against the host UAE on June 15.

“We haven’t thought about the game with UAE yet because we are focusing on this one with Malaysia,” he added.

Vietnam will go into Malaysia game without the service of midfielders Nguyen Tuan Anh, who was injured from the previous game against Indonesia, and Nguyen Quang Hai who has been suspended after earning two yellow cards in previous games. This is certainly a disadvantage for Vietnam, considering the key roles of these players.

“But I think coach Park has built a great team so I believe whoever are chosen to replace Tuan Anh and Quang Hai will do a good job. It will be another tough game for Vietnam. Malaysia have good strength and pace, especially on the flanks. Vietnam need to play tight and exploit the chances. That’s what we have been preparing for this game,” Truong said.

The game will kick off at 11:45 p.m. (Hanoi time) and will be reported live on VnExpress International.

Administrator - 12 May, 2021 0
Loic Desriac, a former French men’s U23 national cyclist, achieved the overall victory of the HTV Cup as the annual north-to-south tournament in Vietnam concluded in Ho Chi Minh City late on Friday morning in celebration of the Reunification Day (April 30).