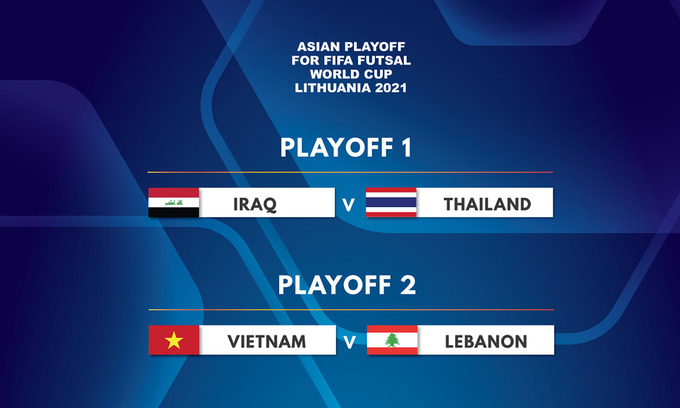 To compete for a Futsal World Cup slot, Vietnam will face Lebanon in a qualification playoff, according to a draw on Tuesday.

The draw ceremony for the Asian Futsal World Cup 2021 playoff, held at AFC House in Kuala Lumpur, Malaysia, resulted in the first playoff between Iraq and Thailand and the second between Vietnam and Lebanon. Each team will play two matches in a home and away format. Two winners will qualify for Futsal World Cup 2021 in Lithuania, scheduled to take place from Sept. 12 to Oct. 3.

The first leg of the playoff will kick off on May 20 while the second will be played five days later.

Vietnam had hoped to finish in the top five at 2020 AFC Futsal Championship in Kuwait to qualify for the World Cup, but the Covid-19 pandemic caused the tournament to be rescheduled thrice before finally being canceled this year.

Therefore, AFC decided to pick the three direct slots and two others through a playoff by combining two sets of criteria. The first is from the top five teams of the most recent continental tournament, AFC Futsal Championship 2018, while the second calculates the top five teams from the overall ranking of the last three editions of AFC Futsal Championship (2014, 2016 and 2018).

Thailand, ranked 18th in the world, are a favorite to qualify. Vietnam, Lebanon and Iraq are ranked 44th, 40th and 56th, respectively.