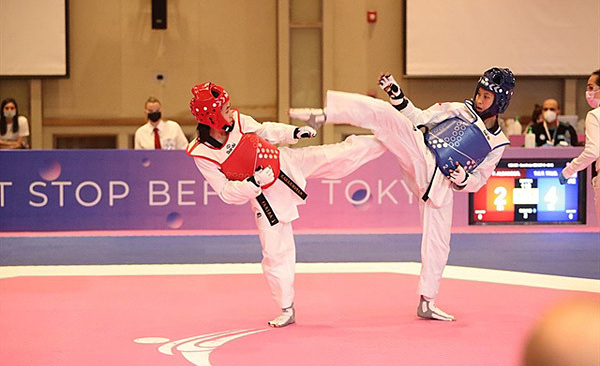 Truong Thi Kim Tuyen (R) during the semi-finals of Asian qualifiers for Olympic Tokyo on May 21, 2021. Photo courtesy of World Taekwondo.

Truong Thi Kim Tuyen clinched a gold medal for Vietnam at the Asian Taekwondo Championships in Lebanon on Thursday.

In the final of the 49 kg category, Tuyen defeated Uzbek fighter Madinabonu Mannopova, runner-up at Asian Games 2019. The intense match ended with a close win 25-24 for Tuyen.

Since Tuyen was seeded first in the tournament, she didn’t have to participate in the first game. In the quarterfinals and semifinals, Tuyen beat opponents from Tajikistan and Taiwan to enter the final.

The Asian Taekwondo Championships took place in Lebanon from June 16 to 18. A total of 337 athletes from 28 countries and territories in the region participated in the event.

Tuyet went on to collect a silver at the championships.

On Saturday, the taekwondo team will travel to Kazakhstan to continue training. Expert Kim and Tuyen will fly to Tokyo on July 19 to compete in the Olympics.

Previously, to prepare for Olympic qualifiers and the Asian Taekwondo Championships, the national taekwondo team left for overseas training on April 14. For the past two months, the team have trained in Kazakhstan and Uzbekistan, before competing in Jordan and Lebanon.

Administrator - 24 July, 2021 0
Located in Hanoi’s outlying district of Thanh Oai, Cu Da village was founded four centuries ago. Through many changes over time, the village still retains its original features.

Administrator - 24 July, 2021 0
Despite fresh water supplies from water plants, people in Hoi An Ancient Town still cherish the habit of drinking from an ancient well. The well water sellers, therefore, have made a living for decades.

Administrator - 27 June, 2020 0
Australia and New Zealand winning the right to host the 2023 FIFA Women’s World Cup has opened the door for Vietnam to qualify for the very first time.