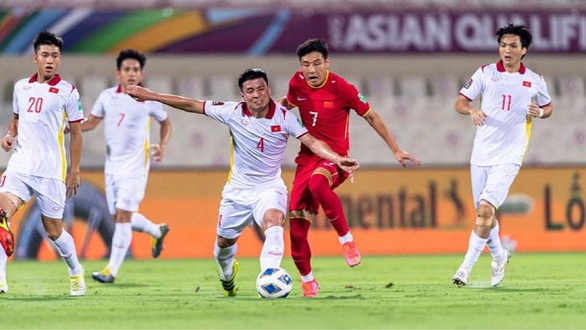 The result marked Vietnam’s third consecutive defeat and China’s first win in the final phase of the qualifiers.

Chinese striker Wu Lei netted the sensational winning shot in the fifth minute of added time after Vietnam fought back from two goals down and looked set to claim a tournament point.

Wu Lei put Truong at risk with a right-winged corner kick less than a minute later.

Vietnam went on the offense and created certain threats to the Chinese box.

Nguyen Quang Hai nearly forced Zhang to put the ball into his own net with an angled free-kick from the right in the 21st minute.

Vietnam switched into attack mode after the break, but conceded two goals.

The first came from the teamwork of Ai Kesen, Zhang, and Wu, whose strike was denied by Truong but bounced back on the path of Zhang, who rolled it into the Vietnamese net in the 53rd minute.

However, over the next 15 remaining minutes, China doubled their lead when Wu was left with time to meet Wang Shenchao’s cross from the left, leaving Truong with no chance.

Vietnam gave themselves a lifeline in the 80th minute when substitute Ho Tan Tai well controlled Duc’s punt forward before thumping his shot past Yan.

Nguyen Tien Linh then slotted home in the 90th minute to tie up the match.

However, while Vietnam hoped to earn a point, Wu guided Wang Shenchao’s cross home from close range in the fifth minute of stoppage time to give China a thrilling finish.

The defeat means Vietnam remain rooted to the bottom of Group B while China moved level with Japan and Oman on three points after three matches.

Australia remained in pole position in Group B and were joined on nine points by Saudi Arabia after their respective 3-1 and 1-0 victories over Oman and Japan on the matchday.

The other group in the final round of Asian qualifiers for the 2022 FIFA World Cup, Group A, consists of Iran, South Korea, the UAE, Iraq, Syria, and Lebanon.

The top two teams from each group will qualify for next year’s tournament while the third-place teams will play for a spot via an inter-continental play-off.

This is the first time Vietnam have made it this far in the World Cup qualifiers.

Administrator - 12 October, 2021 0
Vietnam confirmed their place at the AFC Women’s Asian Cup India 2022 after snatching a 7-0 victory over Group B hosts Tajikistan in their final qualifying match on Wednesday.