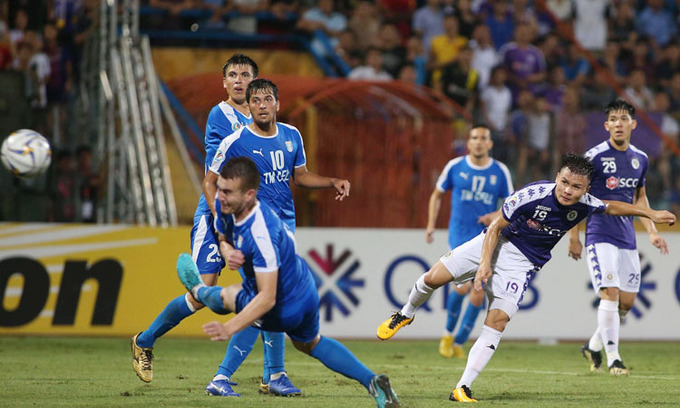 Nguyen Quang Hai (in purple) scores for Hanoi FC in the inter-zone semifinal of AFC Cup against Altyn Asyr on August 20, 2019. Photo by VnExpress/Lam Thoa.

During the poll by Asian Football Confederation (AFC), Hai accumulated 96 percent of all votes (61,960 out of 64,542), followed by Indian striker Sunil Chhetri with three percent and Indonesian midfielder Gerald Pangkali at only one.

Hai’s wonder goal occurred during Hanoi FC’s 3-2 win against Turkmenistan side Altyn Asyr in their AFC Cup 2019, inter-zone semi-final first leg clash, when he pocketed the ball in his favorite spot, the top left corner.

“Anywhere just outside the penalty area is Nguyen Quang Hai territory and in the 2019 inter-zone semi-final first leg, he showed Turkmenistan’s Altyn Asyr exactly what he was capable of with a delightful effort that left goalkeeper Mammet Orazmuhammedov flat-footed. With Hanoi FC a goal down as half-time approached, the midfielder bent the ball around the wall to level the scores with his first of two stunning goals in a 3-2 victory for the Vietnamese champions,” AFC wrote.

After the win, Hanoi FC drew 2-2 with Altyn Asyr in the second leg to enter the inter-zone final play-off, where they lost to North Korean club April 25 SC.

Hai, 23, scooped silver at the Vietnam Golden Ball 2019 ceremony on May 26, finishing behind Hanoi FC midfielder Do Hung Dung. Both Dung and Hai won SEA Games 30 gold, alongside the V. League 1 trophy and National Cup. Hai won the golden ball in 2018 and bronze in 2017. He is the only player to have won golden, silver and bronze.

Administrator - 18 March, 2020
0
NDO – The 2019 Japanese Film Festival will be held in Hanoi from December 6-22, promising to entertain the audiences of the capital city.

Administrator - 3 May, 2020
0
Tuan Anh, who only goes by his pseudonym, has been an active private detective for more than a decade, empowered by the quest for truth and his experience dealing with all types of requests from clients.

Administrator - 26 March, 2020
0
InterContinental Hotels & Resorts, the world’s largest luxury hotel brand, today reveals the most iconic sights, sounds, tastes, smells and sensations that travellers should experience in 2020 if they want to really get to know the city they are visiting.

Visiting the most beautiful ancient house in Can Tho

Administrator - 18 March, 2020
0
NDO – Located on Bui Huu Nghia street, Can Tho, the ancient Binh Thuy house is a rare ancient constructions in Vietnam which has been well preserved and kept intact, allowing visitors to explore the culture and the life of Southwest region’s people in the 20th century.

Administrator - 18 March, 2020
0
The beach resort of Quy Nhon in the south central province of Binh Dinh was featured in an article published on the Bangkok Post, a major English-language newspaper in Thailand, on May 9.

Administrator - 18 March, 2020
0
The Vietnam sports delegation wrapped up their 30th SEA Games campaign in style, settling for second place in the overall medal tally with 98 golds, 85 silvers and 105 bronzes, a surplus of 33 golds over the target (65) set ahead of their departure.