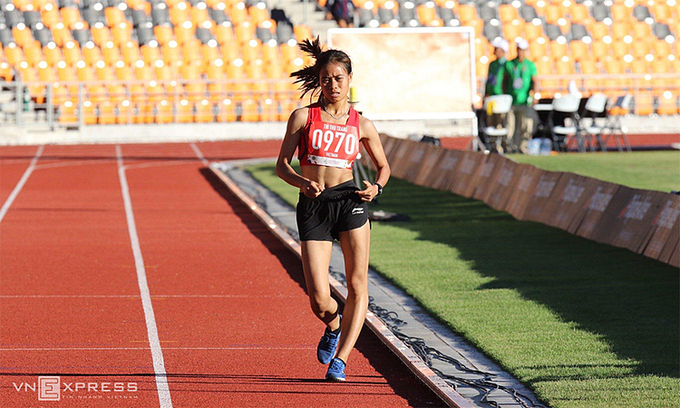 Vietnamese Pham Thi Thu Trang is well ahead of her rivals as she wins the women’s 10,000 m walking race at the 30 SEA Games in the Philippines, December 8, 2019. Photo by VnExpress/Quang Huy.

The 31st Southeast Asian Games in Hanoi next year will feature the largest number of Olympic sports in the event’s history.

Tran Duc Phan, deputy director of the General Department of Sports and Physical Training, revealed this at a meeting held in Hanoi this week to review plans for SEA Games 31.

Vietnam wants to be a pioneer in organizing a SEA Games with the same disciplines as the Asian Games and Olympics to give all participating countries a chance of winning medals. Often host countries seek an unfair advantage by including a number of their own traditional sports.

The government has determined that Olympic and Asian Games sports will account for two thirds of the events at the SEA Games, and other countries could propose the inclusion of other sports as usual, Phan said.

This change will help evaluating the development trend of regional sport as well as the foundation of Vietnamese sport, he affirmed.

Earlier Vietnam has announced to add shuttlecock kicking, diving and vovinam to the tournament as its strong sports.

Next year Vietnam will be hosting the biennial games for a second time after first hosting it in 2003.

At last year’s games the country finished second in the medals tally with 288, including 98 golds.

Six delicious dishes to try during the winter in Hanoi

Administrator - 21 March, 2020
0
As chilly weather steadily begins to creep over Hanoi, cold days allow people in the capital to enjoy a number of famous dishes.

Administrator - 18 March, 2020
0
Phú Quốc’s pure white beaches, clear waters, and laid-back vibes have earned it a spot in the hearts of many travelers. Days here are spent on the sand, while nights are for feasting on fresh seafood and stargazing. Vietnam’s largest island is home to a beautiful coastline.

Administrator - 21 March, 2020
0
An image that was taken in Vietnam by a foreigner, Luis Maria Barrio, has been listed among the Top 10 artworks in the Travel category by The Independent Photographer award.

Administrator - 18 March, 2020
0
Ly Club Hanoi is where travellers can enjoy a good mix of Vietnamese, Asian and European cuisine as well as daily cultural performances after a day of exploring Vietnam’s capital. Occupying a restored 19th century colonial villa, it’s divided into several dining concepts and an outdoor patio with views of Hoan Kiem District. On the ground floor, you’ll find a softly-lit lounge serving premium cigars, cocktails and spirits, and wines, while the upper levels are luxurious dining areas fitted with antiques and ornaments dating back to the Ly Dynasty. Diners seated on the third floor can also enjoy traditional Vietnamese performances between 19:30 and 21:30 every day.

10 Best Things to Do in Nha Trang

ABOUT US
Viet Explorer is all about Vietnam culture & lifestyle.
Contact us: wwwvietexplorercom@gmail.com
FOLLOW US
© Copyright 2020 - https://vietexplorer.com
MORE STORIES

Administrator - 4 April, 2020
0
Young Matthew Houston, an American citizen infected with the coronavirus, has said Vietnam has carried out the isolation work well to prevent the spread of the virus to the community.