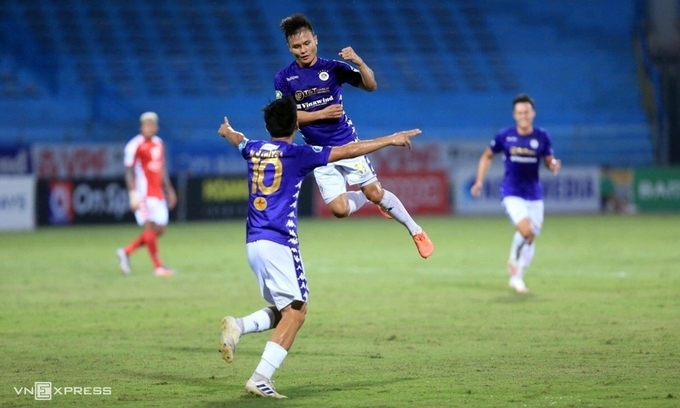 Hanoi FC will get a direct entry to the AFC Cup 2021 after winning National Cup 2020. Photo by VnExpress/Lam Thoa.

One direct qualification for AFC Champions League and two for AFC Cup will be awarded to Vietnamese clubs starting next year.

The Asian Football Confederation (AFC) has decided to change the number and distribution of clubs in AFC Champions League and AFC Cup next season, based on individual club ranking.

At AFC Champions League (ACL) 2021, there will be 54 participating teams, of which 32 will be given direct entry to the group stage while 22 compete in play-offs for the remaining eight spots. ACL 2021 will take place from February 2 to November 27.

Vietnam’s current AFC Club Competition Ranking score is 28,571, placing 16th in Asia and 8th in East Asia. This position is enough to win Vietnam one direct entry to ACL 2021, awarded to the champion of V. League 1 this season. This will make the V. League 1 title race even more competitive, since ACL is the highest level club competition in Asia, equivalent to Europe’s UEFA Champions League.

For the lower tier AFC Cup, Vietnam will gain two direct entries to the group stage, one for the runner-up of V. League 1 and the other for the champion of National Cup, aka Hanoi FC. If the latter finishes as runner-up of V. League 1, the remaining AFC Cup spot would be given to the club that finishes third. If Hanoi FC wins V. League 1, they would automatically proceed to ACL while the two AFC Cup spots go to league runner-up and third placed team. AFC Cup 2021 will take place from February 9 to November 6.

In 2008, Becamex Binh Duong and Nam Dinh FC made it into the ACL group stage but were both disqualified after one draw and five losses each. In 2016, Binh Duong once again qualified for the ACL group stage but after one win, one draw and four losses, their campaign came to an end. Hanoi FC entered the ACL play-offs in 2015, 2016 and 2019 but failed to proceed further. After Hanoi FC exited the ACL 2019 play-offs, it made it into the AFC Cup inter-zone finals.

Other Southeast Asian countries also benefit from the competition’s expansion. Thailand will receive two group stage and two play-off slots while Malaysia and Singapore each gain one group stage slot.

Earlier this year, HCMC FC lost to Thailand’s Buriram United in the second qualification round of the AFC Champions League 2020. After, they joined Than Quang Ninh in AFC Cup, topping their group before the tournament got canceled on September 10. It was originally scheduled to start in March and then postponed to September due to the Covid-19 pandemic.

The AFC Champions League final is scheduled to commence on December 19.

Formula 1 model cars to be paraded on Hanoi streets

Administrator - 18 March, 2020 0
A parade with three Formula 1 car models will be held in Hanoi this Saturday to commemorate the Vietnam Grand Prix’s debut in April.

Administrator - 10 July, 2020 0
Asian Football Confederation has decided to change the format of AFC Cup group stage and knockout rounds to guarantee safety during the pandemic.