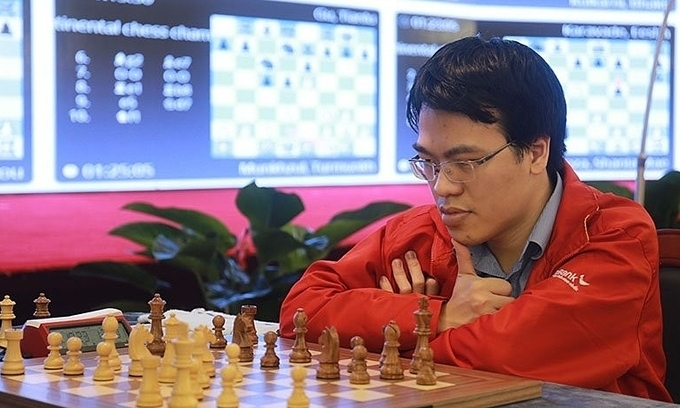 Le Quang Liem has advanced into the quarterfinals of the New in Chess Classic. Photo courtesy of Continental Chess Association.

Le Quang Liem has finished seventh in the New in Chess Classic group stage to enter the quarterfinals.

On the third day of the tournament on Tuesday, as the group stage drew to a close, the Vietnamese grandmaster needed at least 2.5 points to qualify for the last eight, and he duly achieved it.

He drew with Cuban GM Leinier Dominguez, took advantage of a mistake in the endgame by Indian GM Vidit Gujrathi to beat him, and drew against Azerbaijani GM Teimour Radjabov and Norwegian GM Aryan Tari to advance.

In the last match he lost to Armenian GM Levon Aronian.

Carlsen topped the group stage with 10.5 points, followed by American GM Hikaru Nakamura a point behind. By finishing seventh with 8.5 points, Liem has avoided Carlsen in the quarterfinals and will instead play Nakamura. Nakamura is ranked fourth in the world in rapid chess and first in blitz chess.

If he beats Nakamura, he will take on the winner of the match between Iranian GM Alireza Firouzja and Azerbaijani GM Shakhriyar Mamedyarov.

The two-day quarterfinals involve four rapid chess matches on each day with tie-breaks to be broken by two blitz chess matches and, if still tied, an armageddon game with white getting more time on the clock. If the result is still a draw, black wins.

The quarterfinals will be played on April 27 and 28.

The New in Chess Classic is part of the Champion Chess Tour, a 10-month long series of 10 online tournaments featuring the world’s top players and with prize money of $1.5 million.

The games are played on chess24.com and broadcast on streaming site Twitch.

Administrator - 11 May, 2021 0
Preparations for the May 23 general elections have so far been basically completed in a thorough, comprehensive and synchronous manner, said Chief of the Office of the Ministry of Public Security Lieut Gen To An Xo.

Thousands ‘run with the sea and sun’ at VnExpress Marathon

Administrator - 27 July, 2020 0
More than 5,000 runners expressing the spirit of running with the elements made VnExpress Marathon Quy Nhon 2020 a grand success Sunday.