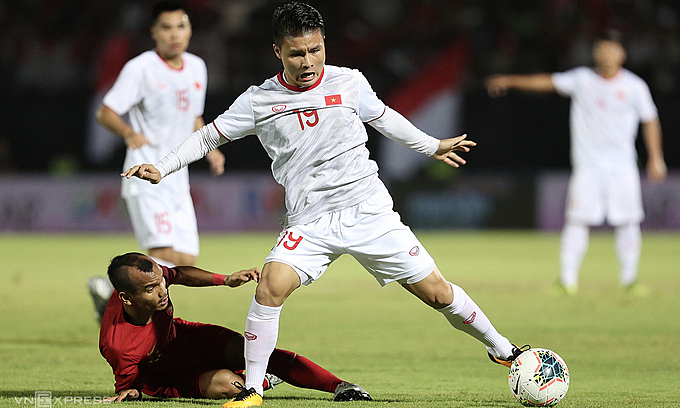 Vietnam national football team (in white) in the 3-1 victory over Indonesia at a World Cup qualification match on October 15, 2020. Photo by VnExpress/Duc Dong.

The original plan was to assemble the team in June and play two friendlies during the FIFA international break. However, the federation felt it was impractical for several reasons.

For one, the V. League 1 is set to resume by the end of May after a long delay and will be played constantly during over the next few months, so calling up players to the national team in June would not be a good idea as the players need play time to get back into shape and form.

The federation already had plans for the national team in September. Aside from intensive training, VFF planned to invite several strong international teams to play some friendlies with Vietnam. Coach Park Hang-seo would have a chance to try different formations and evaluate the players before choosing the final squad for the World Cup 2022 qualifiers.

As per current schedule, Vietnam will play an away game against Malaysia on October 13. Then they get to play their last two matches of group G on home ground, against Indonesia (November 12) and the UAE (November 17).

During this time, the U22 team will train for the SEA Games 31 in 2021. Park will let his assistant Kim Han-yoon take charge of the team as they play some exhibition matches. Although SEA Games 31 won’t take place until December 2021, the U22 team needs more time to prepare and recruit more players, especially with most of the players took part in SEA Games 30 already exceeding the age limit.

In group G of the World Cup qualifiers, Vietnam leads the table with 11 points, followed by Malaysia (nine), Thailand (eight) and UAE (six). Vietnam will need to get at least seven points in the last three matches to get a ticket to the next qualification round.

Administrator - 18 March, 2020 0
Ho Chi Minh City FC won for the first time at the 2020 AFC Cup on Tuesday, edging past Hougang United despite the hosts’ spirited fightback at Jalan Besar Stadium in Singapore.

Administrator - 13 May, 2020 0
Vietnam’s inaugural Formula One Grand Prix will take place in Hanoi in April as planned, organizers told AFP Tuesday, avoiding the fate of the Chinese Grand Prix, which was postponed over the deadly coronavirus.