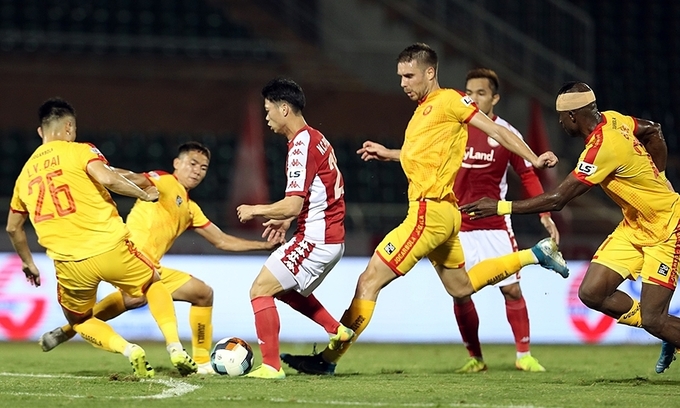 Vietnam’s topflight football league, V. League 1, has been postponed after two rounds because of the worsening Covid-19 epidemic situation.

The next round of matches was scheduled for later this week before the national team gather to prepare for the 2022 World Cup qualifiers. FIFA has agreed to postpone the Asian qualifiers in March and June.

Clubs earlier played the first two rounds of the V. League behind closed doors. Stadium managers had to check players, support staff and referees’ temperatures before the match to prevent the risk of infection.

The league is scheduled to resume on April 10, and, based on the Covid-19 situation then, the VPF will decide whether to open the gates to spectators or continue playing without them.

On Friday the VPF also announced the postponement of the first two rounds of the V. League 2, the second division. A new schedule will be announced by the end of March.

The pandemic has affected football around the world, especially Europe, where all national leagues have been suspended. In Southeast Asia, the Thai League has been postponed indefinitely.

Administrator - 18 March, 2020 0
Vietnam won the Asian Pencak Silat Championship for the second year in a row at the fifth edition of the event.

Administrator - 18 March, 2020 0
Coach Park Hang-seo took responsibility for Vietnam’s rather tame performance at the AFC U23 Championship saying the players have much room for improvement.