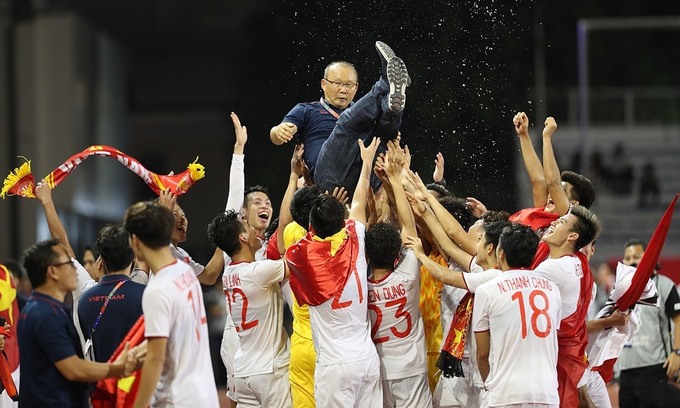 U22 Vietnamese players lift coach Park Hang-seo up in the air to celebrate Vietnam’s first gold medal at SEA Games men’s football in the Philippines, December 10, 2019. Photo by VnExpress/Duc Dong.

Coach Park Hang-seo, mastermind behind Vietnam’s recent success in men’s football, ranked 38th on the list of 40 most influential celebrities in South Korea.

Park earned an overall score of 21.5, becoming the only coach to appear on The Korea Power Celebrity 2020 compiled by South Korea-based Forbes Magazine.

The annual list ranked celebrities from sports, music, arts, film and television based on professional achievements, influence, popularity and income from the past year.

According to Forbes, Park boosted his fame at home following many successful years coaching the Vietnamese national football team.

The South Korean took over the team in 2017, with Vietnam since reaching the 2018 Asian Games semifinals and 2019 Asian Cup quarterfinals, winning 2018 AFF Championship and ending as runners-up at 2018 AFC U23 Championship.

The Vietnamese football team won gold for the first time at SEA Games 30 in 2019.

Park, 62, played for the Korean national team before starting his professional coaching career in 1989.

He was an assistant to Dutchman Guus Hiddink, who led Korea to the 2002 World Cup semi-finals and the U23 team to an Asian Games bronze medal the same year.