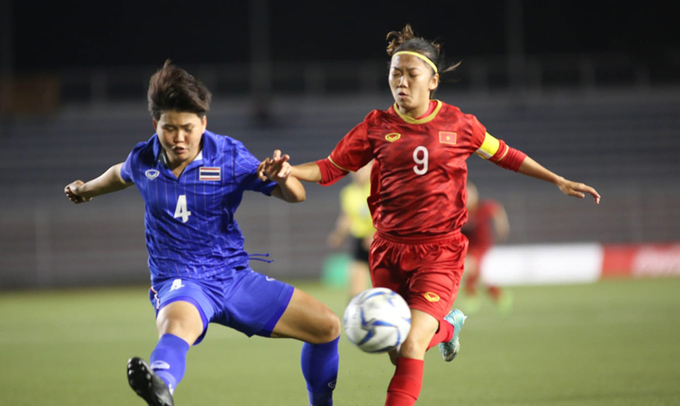 Huynh Nhu (R) during the final of women’s football between Vietnam and Thailand in SEA Games 30 on December 8, 2019. Photo courtesy of FIFA.

Huynh Nhu, the star forward of Vietnam women’s national football team, has decided to stay in Vietnam rather than play for Portuguese club Lank FC due to the Covid-19 pandemic.

Nhu will not join Lank FC despite an agreement reached with the club in September last year, a representative of HCMC’s Department of Culture and Sports said.

Despite having previously expressed the desire to play football in Europe, Nhu will continue playing in the domestic league amid the ongoing pandemic in Portugal. The southwestern European country hit its daily Covid-19 death record Monday, having recorded over 560,000 cases and more than 9,000 fatalities in total.

With all her paperwork already in order, Nhu’s decision will see her miss the chance to become the first Vietnamese female player to compete in Europe.

The Braga-based club were established in early 2020 and are eager to recruit new players to join their first tournament, Portugal’s third division Campeonato Nacional III.

Nhu is a key national team and Ho Chi Minh City I W.F.C. player. She helped the club win the domestic title and with the national team, reached the final Olympic qualification round last year. Nhu won the Vietnamese Golden Ball 2020 award on Jan. 12 in the women’s category, her third overall.

Administrator - 5 March, 2021 0
Vietnam got through 2020 as one of only a few to fulfil the dual goals of containing the COVID-19 pandemic and developing its economy. This achievement can be attributed to the determination and effort of all sectors, most notably science and technology.

Administrator - 5 March, 2021 0
NDO – An exhibition, entitled “The Communist Party of Vietnam over congresses”, officially opened at the Thai Hai Reserve Area of the Ecological Houses-on-stilts Ethnic Village in the northern province of Thai Nguyen on January 30.

Administrator - 12 April, 2020 0
Song Lam Nghe An and Sanna Khanh Hoa are among world clubs that have fielded the least number of players in the last four years.