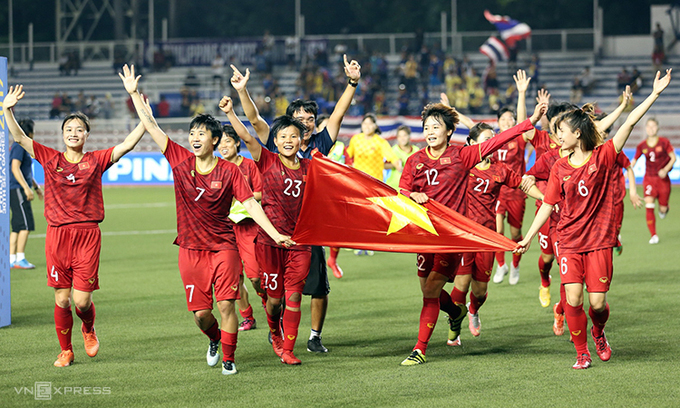 Australia and New Zealand winning the right to host the 2023 FIFA Women’s World Cup has opened the door for Vietnam to qualify for the very first time.

The two countries beat Colombia’s bid by 22 votes to 13 at the FIFA Council meeting Thursday to officially become co-hosts of the 2023 Women’s World Cup. The tournament will be the first co-confederation-hosted FIFA World Cup, as well as the first Women’s World Cup held in the Asia-Pacific region.

It was previously announced the 2023 World Cup would allow more teams to qualify for the group stage, expanding from 24 to 32. This means the Asia-Pacific region would be given 8.5, instead of 5, qualification spots for the tournament.

This comes as good news to the Vietnamese women’s national team currently placed sixth in Asia in the FIFA Women’s ranking behind Japan, South Korea, China, Australia and North Korea.

With Australia automatically entering the group stage, Vietnam could expect to avoid this formidable opponent in the qualification round.

“This brings greater opportunities for not only Vietnam but also other teams in Asia,” said Mai Duc Chung, head coach of the Vietnamese women’s national team. “This is very good news, and we will make every effort to do our best in the coming stages.”

Eight countries to directly qualify for the 2023 World Cup will be decided after the 2022 AFC Women’s Asian Cup, with the country finishing ninth to enter the play-off against a team from another region.

In the 2015 AFC Women’s Asian Cup, Vietnam lost to Thailand in the match for the fifth and final place at the 2019 Women’s World Cup in France.

Administrator - 18 March, 2020
0
NDO – The first-ever festival honouring Vietnam’s brocade culture will take place in Dak Nong province from December 27 to 30 with a wide range of culture and arts activities.

Administrator - 21 March, 2020
0
As March rolls around, many book distributors turned to online platforms to promote new releases as people fear the 11th annual Ho Chi Minh City Book Festival might be canceled due to the COVID-19 epidemic.

Administrator - 11 May, 2020
0
Authorities of the central province of Quang Binh have allowed local tourist sites to open after the suspension due to Covid-19.

Administrator - 18 March, 2020
0
Takashimaya Vietnam is the first Japanese department store branch in Ho Chi Minh City, carrying a wide range of products from Japan, Europe, and the US. Appealing to mostly middle and upper-class shoppers, the five-storey department store has a total retail space of 15,000 square meters. The first level is fitted with jewellery, cosmetics and fragrance brands from Europe such as Clarins, L’occitane, Christian Dior, Bobbi Brown, Shiseido, and Estee Lauder. Lancôme features a café-style boutique at Takashimaya Vietnam, where you can enjoy complimentary makeup lessons and gifts. Other brands available here include Laneige, Shiseido, Sisley, and Shu Uemura.

Administrator - 19 March, 2020
0
Small but lethal ‘Little Chicken’ Nguyen Van Duong has become the first ever Vietnamese featherweight boxer to qualify for the Olympics.