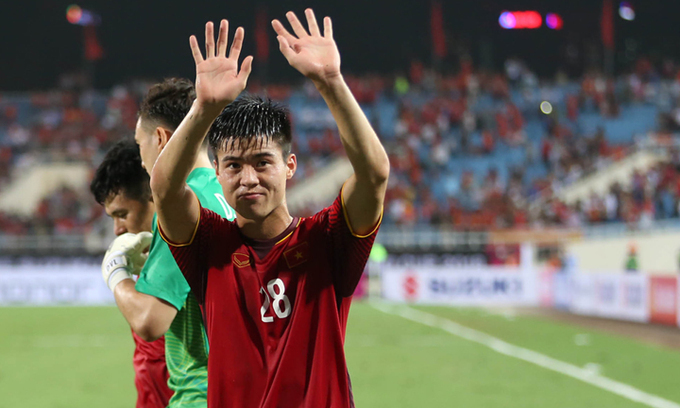 Do Duy Manh in AFF Cup 2018. Photo by VnExpress/Duc Dong.

24-year-old center-back Do Duy Manh is the 10th most popular Southeast Asian football players on Instagram.

Manh has 942,000 followers on the largest photo sharing social network, peaking at number 10.

Topping the list is Thai superstar Chanathip Songkrasin with two million followers, and second is Indonesian winger Febri Haryadi with 1.9 million. Indonesian players dominate the list with six players, while Thailand has three. Manh is the only Vietnamese player in the ranking.

Manh has been a regular face in the national team under Park Hang-seo’s lead where he serves as one of three key defenders alongside Que Ngoc Hai and Tran Dinh Trong. He also took part in AFC U23 Championship 2018 where the team finished as runner up, as well as Asian Games 2018 with Vietnam finishing among the top four teams.

Currently, Manh is treating a torn anterior cruciate ligament (ACL), which doctors said could take until January 2021 to heal. That means he can miss the chance to join Vietnam’s remaining three group G, World Cup 2022 qualifiers in October and November, and to join his teammates in defending their title at AFF Cup 2021 from November 23 to December 21.

Administrator - 25 September, 2020
0
Peddlers in Ho Chi Minh City are mostly migrants from other provinces who, despite their low income, persist at work to fend for both themselves and their family members in their hometown.

For Covid-19 patients, online harassment is almost as bad as the disease

Da Nang in the ‘new normal’

Administrator - 25 September, 2020
0
Steffen Kraft, a German artist has creatively turned the familiar medical face masks into stunning and meaningful artworks. The mask-inspired illustration has garnered a lot of interest from Internet users worldwide.

Administrator - 18 March, 2020
0
The head coach of the Vietnamese women’s national football team has set a humble goal for his players to only learn from their upcoming clashes with Australia in the two-legged play-offs of the Tokyo Olympics 2020’s Qualifying Tournament.