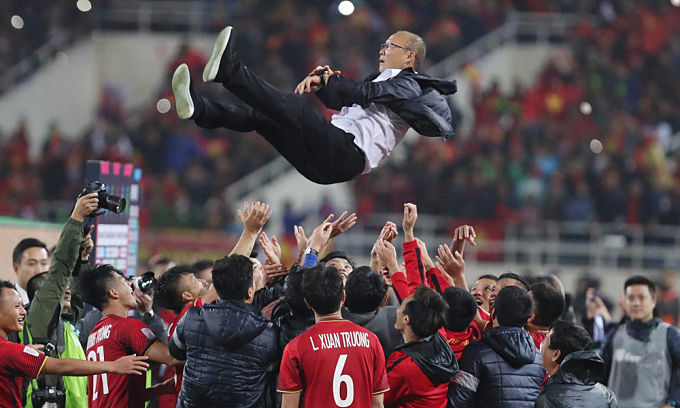 After the AFF Cup 2021 draw, coach Park Hang-seo said the first goal would be making it past the group stage.

“Except Brunei and Timor-Leste who are in the play-off, other national teams in Southeast Asia are at a similar level. The opponents of Vietnam in group B are not easy to play. The team must give their best in every single game. The first goal will be getting past the group stage, only after that can we think about the semifinals and final,” Park said.

The AFF Cup 2021 draw on Tuesday put Vietnam into group B with Malaysia, Indonesia, Cambodia and Laos. Group A consists of Thailand, Myanmar, the Philippines, Singapore and the winner of the play-off between Brunei and Timor-Leste.

Vietnam are the defending champions, having won the title in 2018 after beating Malaysia 3-2 in two legs of the final.

In the remainder of the year, Vietnam will also have to play the World Cup qualifiers, with Park having to distribute resources properly across tournaments.

“Vietnam are competing in the final round of World Cup qualifiers, so we will face many difficulties in traveling between home and away matches. In addition, V. League was canceled so we cannot pick new players for the squad. At the moment, many players are injured and it’s hard to find replacements,” Park said.

AFF Cup 2021 will take place between Dec. 5, 2021 and Jan. 1, 2022. Due to Covid-19, the tournament will be hosted in a single country. The ASEAN Football Federation will decide the host country by the end of September, with Singapore the potential host since it has successfully contained the pandemic.

Administrator - 12 October, 2021 0
Vietnam confirmed their place at the AFC Women’s Asian Cup India 2022 after snatching a 7-0 victory over Group B hosts Tajikistan in their final qualifying match on Wednesday.