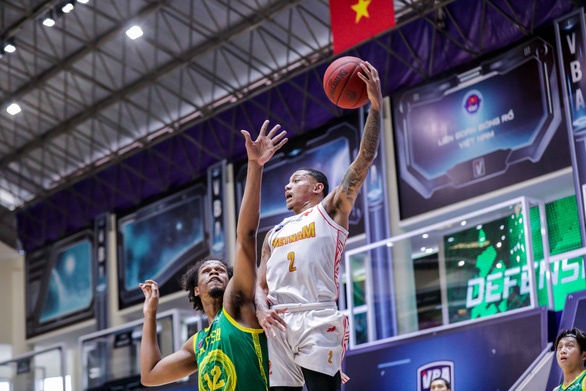 was an invaluable experience for the Vietnamese national basketball team, who participated in the league for the first time in order to prepare for the upcoming 2021 SEA games.

After bringing home two bronze medals from the 2019 Southeast Asian (SEA) Games in the Philippines, the Vietnamese men’s national basketball team now has their sights set on changing the color of their medals at this year’s iteration of the Games, using the 2021 VBA tournament as a warm-up.

Adding the national team to the country’s premier basketball league is an unprecedent move in Vietnamese sports, but many consider the decision by the VBA organizing board and the Vietnam Basketball Federation (VBF) an important step in preparing the team for future international tournaments.

All for national team

It took a considerable amount of persuasion, but the VBA organizing board and the VBF managed to convince the league’s clubs to release many of their star players to sign up for the national team.

As a result, Justin Young, Dinh Thanh Tam, Khoa Tran, and Le Ngoc Tu, and young players like Richard Nguyen, Huynh Thanh Tam, Son Minh Tam, and Nguyen Anh Kiet — all of whom had suited up in red and gold for the 2019 SEA Games — competed for the national team at the 2021 VBA.

At this year’s VBA, they enjoyed the leadership of their familiar coach Kevin Yurkus, who had led them to the achievement of the two bronze medals at the 2019 SEA Games. Yurkus was also the former coach of Saigon Heat.

To keep things fair in the VBA, the organizing board made changes to its rules, including banning the Vietnamese national basketball team from using more than four Vietnamese players on the court at a time.

Meanwhile, the league’s clubs were only allowed to use one player of Vietnamese origin and two foreign players with a combined height of no more than four meters.

They also had the national team’s participation in the league entirely privately funded.

COVID-19 had a significant impact on this year’s VBA season, including the cancelation of the Tip-Off Cup – an event held annually to kick-start the VBA season – as well as the relocation of the league to Nha Trang City and its transformation into the VBA Premier Bubble Games.

According to coach Yurkus, who has been managing the Vietnamese national team since 2019, participating in the 2021 VBA was a great preparation for the SEA Games.

Yurkus said that the team did not take long to bond and hailed his players for understanding one another.

He noted his appreciation for the faith his players placed in him, particularly while coping with the difficulties of the ongoing COVID-19 pandemic.

Yurkus said a team’s success depends on both its starters and subs.

On the national team, Justin Young and Tam Dinh are widely considered the team’s pillars, providing support for the squad’s young talents.

The VBA Premier Bubble Games allowed the young guys on the squad a chance to put their abilities to the test alongside Young and Dinh, Yurkus said.

During the course of the series, the Vietnamese team won five games and lost four, including three consecutive defeats against Danang Dragons, Hanoi Buffaloes, and Saigon Heat.

However, Yurkus said that the team’s results at the VBA are not particularly important given that their primary focus is the SEA Games.

Participation in the VBA, Yurkus said, was meant purely as a growth opportunity for his younger players.

He hailed his players for performing well, becoming braver, and building trust in each other.

The professionalism of the VBA league also improved this season compared to last, thanks to participation from strong teams such as Danang Dragons, Saigon Heat, Hanoi Buffaloes, and Thang Long Warriors.

As the 2021 SEA Games has been postponed until 2022, the call-up plan of the Vietnamese national basketball team has been pushed back, with many personnel changes expected in the near future.

However, the team intends to continue using their time before the Games to prepare for a better medal run.