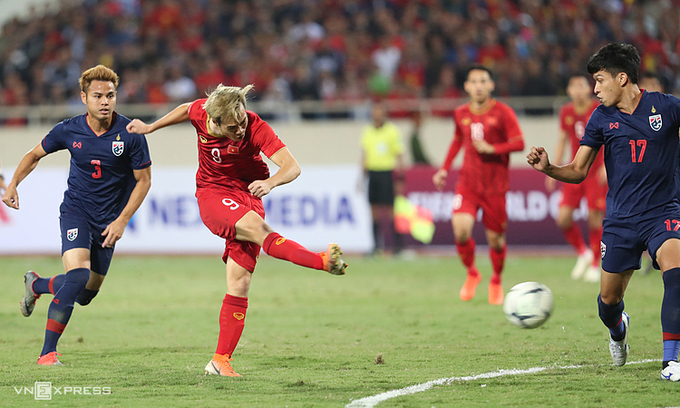 Forward Nguyen Van Toan takes a shot during a match with Thailand on November 19, 2019. Photo by VnExpress/Duc Dong.

Vietnam and Thailand are the first seeded teams of 2021 AFF Cup, meaning they will not clash in the group stage.

The ASEAN Football Federation (AFF) seeded the teams based on performance at the most recent AFF Cup tournaments. Defending champion Vietnam will be the first seed, along with Thailand, the second seeds, Malaysia and Indonesia, and the third, the Philippines and Myanmar. The fourth seeds are Singapore and Cambodia, and the fifth, Timor Leste and Brunei.

AFF Cup was originally scheduled to take place from Nov. 23 to Dec. 31, 2020. But due to the Covid-19 pandemic, it was postponed to 2021. The group stage draw is set to commence on Aug. 10 while the main event takes place in December.

Covid-19 is also the reason AFF decided to change the tournament format. Ten teams will be divided into two groups while all games are played in two centralized venues of two countries. The semifinal and final will only have one game each instead of two.

Vietnam won the title in 2018 after defeating Malaysia 3-2 after two legs of the final.

Administrator - 22 September, 2021 0
The central coastal province of Khanh Hoa has issued a plan to welcome visitors in October with priority given to leisure and closed tourism services.