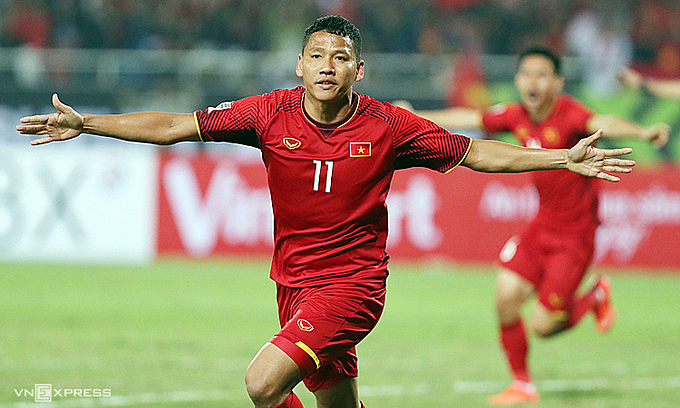 Nguyen Anh Duc retired from international football in 2019, but the striker has returned to the national team in the latest call up.

Duc, 34, had played an important role in Vietnam’s victory in the AFF Cup 2018 campaign as well as Asian Cup 2019, where the team finished in the top eight. He announced his retirement from international football on November 19, 2019 after playing Thailand in the World Cup 2022 qualifiers.

In the 2019 season, Duc also left Becamex Binh Duong after 13 years. He was a free agent until Hoang Anh Gia Lai signed him in July this year.

Despite the fact that Duc has only played one game for the new club, coach Park Hang-seo decided to call him up to the national team. He has called up 33 players for the latest training session, including familiar faces like Nguyen Cong Phuong, Do Hung Dung and Nguyen Quang Hai, as also some newcomers.

Doan Van Hau has also been called up. After returning from a disappointing run with Dutch club SC Heerenveen, Hau was quarantined in Quang Nam Province on August 2. After 14 days, he will join his teammates in Hanoi for a one-week training camp.

The Covid-19 pandemic has prompted Park not to call main goalkeeper Dang Van Lam to the team, because the latter is training in Thailand with his club Muangthong United to prepare for the Thai League when it returns in September.

Park has also not chosen players from SHB Da Nang and Quang Nam FC, the central city and the province being current Covid-19 hotspots. Only Nguyen Huy Hung of Quang Nam is present, because he’d gone to Hanoi before the new outbreak happened.

The national team are scheduled to gather in Hanoi on August 16 for a medical check before beginning training on August 18.

Administrator - 25 September, 2020
0
Vietnam Airlines will operate its first commercial international flight in months on September 18th. The Vietnamese flag carrier will fly to Tokyo’s Narita Airport, carrying passengers who need to get to Tokyo. The airline, however, will not currently be bringing passengers back to Vietnam.

Administrator - 25 September, 2020
0
National flag carrier Vietnam Airlines said on September 23 that it is selling tickets for Flight VN471 from the Republic of Korea’s Seoul to Hanoi, scheduled to take off on September 25 morning.

Administrator - 25 September, 2020
0
Peddlers in Ho Chi Minh City are mostly migrants from other provinces who, despite their low income, persist at work to fend for both themselves and their family members in their hometown.

The village with 20 old French-style villas

Administrator - 25 September, 2020
0
More than 100 years ago, Nha Xa village in Duy Tien district, Ha Nam province was famous for silk weaving and silk exports, which turned the village into one of the richest in northern Vietnam.

Administrator - 25 March, 2020
0
Vietnamese boxers will take on international rivals in the Victory 8 tournament in the Philippines in May.