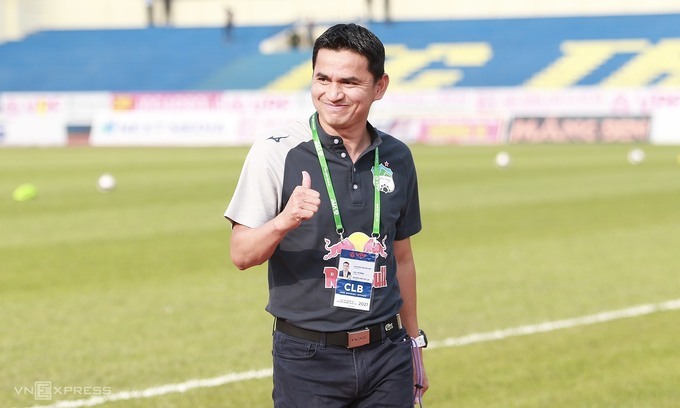 Hoang Anh Gia Lai head coach Kiatisuk Senamuang has joined FIFA Century Club as one of the footballers with over 100 international appearances.

He played for the Thai national team from 1993 to 2007, scoring 70 goals in 131 games. He is the most capped player and top scorer in Thai history.

Getting into coaching soon after retirement, he helped Thailand win two AFF Cup titles and one SEA Games gold. He managed to get Thailand into the final round of the 2018 World Cup qualifiers.

He has a long and close connection with HAGL. He played for the club from 2002 to 2006, winning two V. League titles and two Vietnamese Super Cups.

In 2006 he became their head coach while still playing. He returned to HAGL again in 2010, but only lasted a year that time.

Last November HAGL appointed him head coach for third time on a two-year contract. After 12 rounds the club are sitting on top of the V. League table with 29 points.

But there are no Vietnamese. Former striker Le Cong Vinh is the most capped player for Vietnam with 83 appearances, following by midfielders Pham Thanh Luong (78 games) and Nguyen Trong Hoang (70 games).

However, Hoang has a chance to increase his tally since he is still playing for the national team.

Administrator - 24 July, 2021 0
Phan Minh Quy, a physically disabled resident from Ninh Binh Province, Vietnam, is uplifting his local community by providing jobs and skills training for those with special needs.

Administrator - 15 December, 2020 0
Kiatisuk Senamuang, a Thai football legend and hero at Vietnamese football club Hoang Anh Gia Lai (HAGL FC) during the 2000s, will return to Vietnam to take the helm at the club, their chairman confirmed last week.