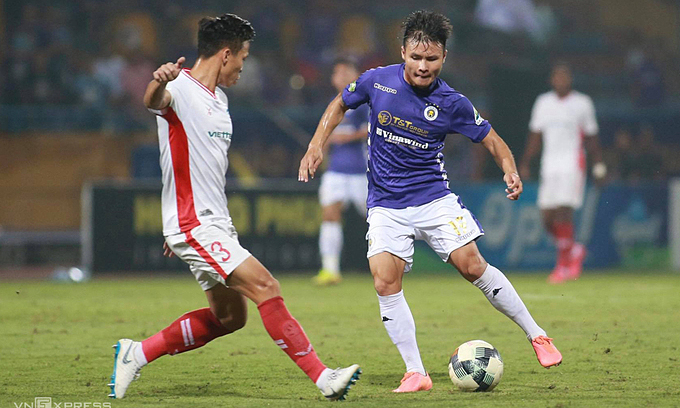 The National Cup final between Hanoi FC and Viettel FC on September 20 is the first football game to allow spectators since the second wave of Covid-19 in Vietnam. Photo by VnExpress/Lam Thoa.

Vietnam’s top-flight division V. League 1 will welcome spectators back to the stadium upon recommencing Saturday.

After two months of suspension due to the second Covid-19 wave in Vietnam, V. League 1 will return with its 12th fixture. Since this is the penultimate fixture of the first leg and match results can be crucial, league organizers decided to host all seven games at 5 p.m. Saturday. All localities have allowed stadiums to open for spectators following containment of the pandemic.

The last two first leg fixtures are important since V. League 1 will commence its second leg to a different format from the first. In the second leg, the top eight first leg teams will be placed in group A and compete for the championship title, while the bottom six commence a relegation battle in group B.

One of the most anticipated games of the 12th fixture is the clash between Song Lam Nghe An (SLNA) and Hoang Anh Gia Lai. SLNA’s Vinh Stadium will open stands B, C and D for free and only sell tickets for stand A. SLNA used to top the table after five undefeated games but only scored one point in the next six matches, falling to 11th spot. Currently, SLNA is two points away from the eighth position Thanh Hoa.

Saigon FC, a dark horse this season, tops the table after 11 games unbeaten and 23 points. They will play Viettel FC, in second spot and only four points behind. Viettel will open the stadium for free to a limited number of fans.

Cam Pha is the only stadium that will not welcome spectators, after People’s Committee of Quang Ninh Province did not approve Than Quang Ninh’s proposal.

When the National Cup returned earlier in September, spectators were only allowed at the final between Hanoi FC and Viettel FC on September 20.

The first leg of 2020 V. League 1 will end after the 13th fixture on October 1. During the second leg, group A is expected to complete its fixtures on November 8 and group B a week later.

Administrator - 19 March, 2020 0
Organizers of Vietnam’s first ever F1 race have canceled the event, originally scheduled to be held on April 3-5, as the Covid-19 epidemic shows no signs of abating.