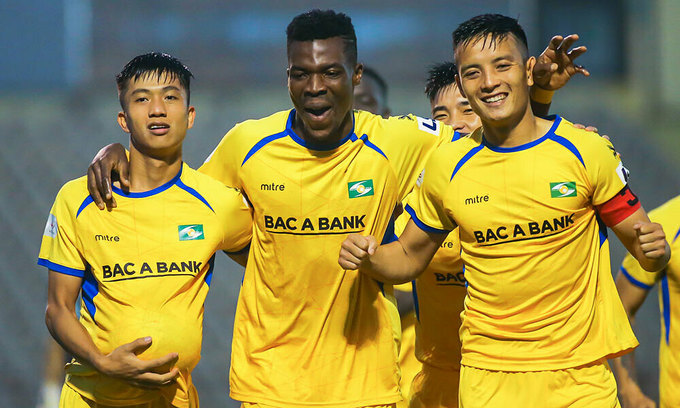 Song Lam Nghe An players during a V. League 1 game against Becamex Binh Duong on March 14, 2020. Photo by VnExpress/Xuan Thuy.

Song Lam Nghe An and Sanna Khanh Hoa are among world clubs that have fielded the least number of players in the last four years.

SLNA and Khanh Hoa are both financially limited and rarely sign new players from the transfer market, rather sourcing them from their own youth academy.

Topping the chart with the fewest number of players fielded in the world is Chinese club Shanghai SIPG with just 44, followed by Japan’s Urawa Reds and Icelandic side Stjarnan with 48.

The 290th edition of CIES Football Observatory Weekly Post ranks clubs from 87 top divisions worldwide according to the number of players fielded in domestic league matches since January 2015. The highest value was recorded for the Colombian side of Deportivo Pasto with 176 different players.

CIES also conducted a report on the average number of players fielded in 87 top football leagues worldwide from 2015 to 2019. Vietnam’s V. League 1 has an average of 26.30 players fielded each year.

V. League 1 has been postponed after two rounds into the season due to the Covid-19 pandemic. It’s set to return by mid-April or early May depending on the situation in Vietnam.

Administrator - 1 December, 2020 0
With a large delivery bag on his back Venezuelan Olympic champion fencer Ruben Limardo is out cycling around his adopted hometown in Poland, making ends meet in a strange but heartwarming tale from this time of pandemic.