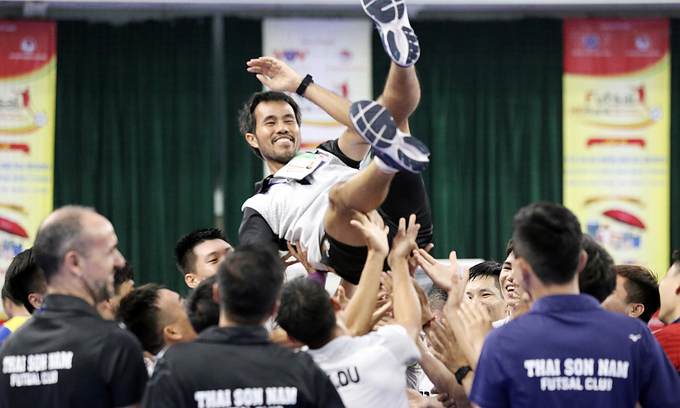 Before the game with Sanvinest Sanna Khanh Hoa in round 15 in Ho Chi Minh City, Thai Son Nam had already scored 36 points and only needed a win to secure the title. Meanwhile, Sanna Khanh Hoa in second place with 26 points could only fight to keep their position against Sahako and Sannatech Khanh Hoa, their chance of winning the league basically zero.

Therefore, they only fielded their B team against Thai Son Nam, saving their key players for the coming games.

In the first half, Thai Son Nam managed to score three goals with multiple missed opportunities. The second half was even more dreadful as Thai Son Nam netted six more, of which four were penalties. Sanna Khanh Hoa committed six fouls in the second half alone.

Eight different Thai Son Nam players scored in the game, underscoring the club’s dominance. After 15 rounds, it had scored 69 goals and conceded 17.

Despite the big win, coach Pham Minh Giang was not entirely satisfied with the performance.

“We are not a perfect team. There are still a few weaknesses and one of them is finishing. In the last game, we had so many chances to score but couldn’t because of our finishing skills. The team will need to gradually improve,” Giang said.

With this the fifth consecutive national league title for Thai Son Nam, the club will automatically advance to the group stage of AFC Futsal Club Championship

Administrator - 18 March, 2020 0
The Vietnamese Golden Ball (VGB) awards ceremony will be held later as the nation grapples with the new pneumonia virus.

No spectators for Vietnam-Australia Olympic qualifier