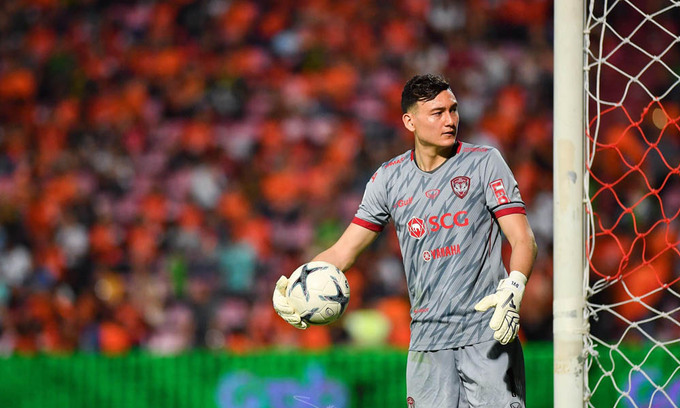 Dang Van Lam is facing a lawsuit from Muangthong United for terminating his contract with the club ahead of schedule.

“Previously, the club had sent a warning and given him a chance to negotiate his contract. However, his agent Andrey Grushin ignored us and terminated the contract without our agreement. The club has given Lam enough time and now we have no choice but to take legal action, by submitting this case to the Football Association of Thailand (FAT) and FIFA. In addition, we will request an inspection of Grushin’s work permit. Lam and his agent will have to face punishment,” Muangthong United CEO Ronnarit Suwacha told Thai site Siamsport on Wednesday.

On Tuesday night, Grushin revealed Lam had left Muangthong in compliance with FIFA regulations since the club had not yet paid Lam’s salary, which Grushin said is a breach of contract.

“We want to keep everything in order at the club, so when Lam grew unhappy with being the second goalkeeper after Samporn Yos, we gave him some chances to play and find a new club. It’s true Muangthong have contacted Cerezo Osaka regarding Lam. However, we can confirm Lam’s contract has not been terminated. Stating we had violated our financial agreement is also a lie. We have paid Lam in full since the pandemic began in February last year,” Ronnarit added.

The CEO said the club had only deducted 30 percent of player salaries during the pandemic, with permission from FAT. Players would get back the 30 percent in February this year. Therefore, technically, it is not a breach of contract.

Grushin, in turn, said Lam had the right to terminate his contract with Muangthong and a lawsuit won’t change anything.

“Van Lam and I followed the correct regulations. We are confident of winning this case, one hundred percent. We have nothing to worry about from this lawsuit. Let’s wait for FIFA’s decision,” the agent said.

After receiving an offer from Japanese J1 League club Cerezo Osaka, Lam had made a preliminary decision to relocate.

Russian top-flight club FC Dynamo Moscow and Portuguese side Sporting Braga have since also made offers, with Lam unable to fly to Japan to sign the deal yet due to Covid-19 travel restrictions.

In 2019, Muangthong bought Lam from Hai Phong FC for $500,000 and he became the main goalkeeper for the club. But in recent months, he lost the spot to Thai keeper Samporn Yos and was constantly sidelined. Muangthong also handed him a 30 percent pay cut without telling him in advance.

Lam used to spend his youth at Dynamo Moscow but could not make the senior squad. In 2011, he joined Hoang Anh Gia Lai but failed to impress. Four years later, Lam joined Hai Phong FC where his career started to take off. He was called up to the Vietnam national football team by coach Park Hang-seo and became the number one team goalkeeper, contributing greatly to the Golden Dragons’ AFF Cup 2018 title win.

Administrator - 12 May, 2020 0
Hanoi’s Formula One circuit will make its debut in the official video game of the Formula 1 Championship to be released this summer

Administrator - 12 November, 2020 0
A rough start due to Covid-19, referee mistakes and an intense final all contributed to an eventful 2020 V. League 1 season.