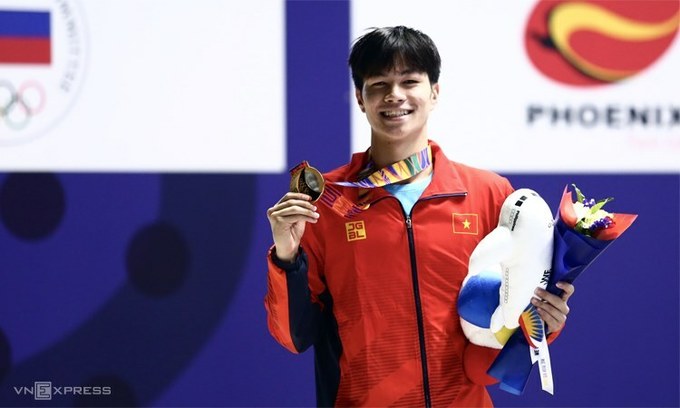 The 17-year-old swimmer retained his high form heading into the competition, scooping gold in the 400 m freestyle category.

With this result, he also broke the Southeast Asian record in the same category, set by Nguyen himself at SEA Games 30 last year (four minutes and 20.65 seconds).

At SEA Games 30 held in the Philippines, Nguyen clinched two gold medals in the 200 m and 400 m freestyle categories at 16 years of age. With four minutes and 20.65 seconds, he broke the Southeast Asian record set by Kim Son during SEA Games 28 in Malaysia (four minutes and 22.12 seconds).

The national youth swimming tournament is held in Da Nang from July 10-20, with the participation of over 400 athletes from 34 cities and provinces.

Three footballers pitch up in Forbes Vietnam’s 30 Under 30

Administrator - 18 March, 2020 0
Forbes Vietnam's 30 Under 30 list for 2020 includes three local footballers, noted for their outstanding contribution to the sport in 2019.

Administrator - 19 March, 2020 0
A 1-2 to loss to Buriram United in their debut match knocked HCMC out of the AFC Champions League competition in Thailand Tuesday.