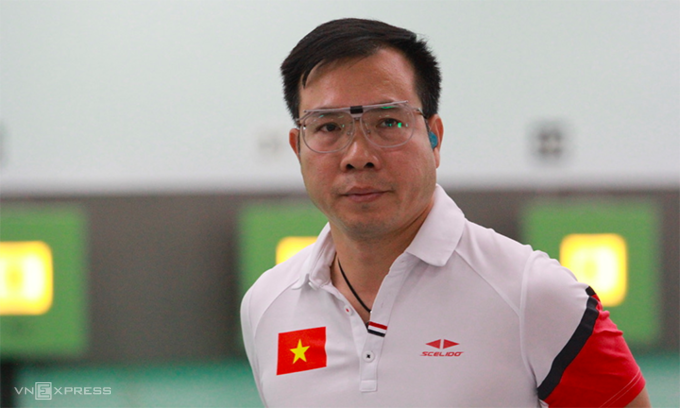 Hoang Xuan Vinh has little to no chance to defend his gold medal at the Tokyo Olympics, considering his current form.

Vinh is still the only Vietnamese athlete so far to win Olympic gold, after defeating Brazilian shooter Felipe Almeida Wu in the final of 2016 Rio Olympics. At the moment, Vinh is in a different position compared to where he was five years ago. From being world number one after the historic Olympic gold, Vinh dropped to 38th before entering what can be his final Olympic event.

During Olympic qualifiers, Vinh failed to get a ticket to the event. He could only qualify thanks to an invitation slot from the organizers. The 47-year-old is also the only representative of Vietnamese shooting in Tokyo, where he will compete in the 10 m air pistol category.

At Olympics 2016, Vinh was the underdog and not highly rated. But he peaked fourth in the first round with 581 points after 60 shots, of which 18 hit the bullseye. In the final, he went all the way to the top. Later, Vinh also grabbed another silver medal in the 50 m pistol event.

Vinh’s form started to drop after the historic feat. In Asian Games 2018, he only scored 579 points in the first out and was eliminated. He also made an early exit at World Cup that year. In late 2018, Vinh competed in an international championship in South Korea but failed to reach the final.

2019 was considered an important year for Vinh, with international tournaments considered Olympic qualifiers. However, Vinh couldn’t make it to any final at any of these contests.

His average point score from 13 international tournaments after 2016 is 575.69, far below Olympic standards.

Three out of four rounds in World Cup 2019 required shooters to score at least 582 points to advance. This is a result Vinh has yet to achieve in his career.

With his form dropping drastically from time to time, Vinh’s chance to enter the Olympic final remains slim. But if he does, the veteran shooter may surprise everyone like he did in 2016.

Vinh will compete on July 24, one day after Tokyo Olympics starts.

Administrator - 14 July, 2020 0
Security will be strengthened ahead of the highly anticipated V. League 1 game between Hanoi FC and Hai Phong FC to guarantee spectator safety.

Vietnam U22 team to play international tournament in France

Administrator - 5 July, 2020 0
Vietnam will be represented by its U22 team as it makes its debut at the Toulon Tournament in France this December.