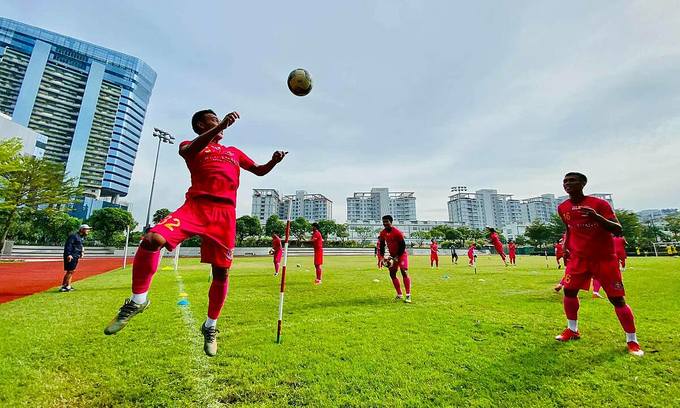 Private companies, including some from Japan, signed sponsorship agreements with Saigon FC after the club recruited Japanese advisers and players for upcoming V. League 1.

The club inked multiple deals worth over VND100 billion ($4 million) with local and Japanese corporations at a ceremony Tuesday.

After Tran Hoa Binh replaced Vu Tien Thanh as new president of Saigon FC, the club had recruited players and advisors from the Japanese league ahead of the 2021 V. League 1 season, including former assistant technical director of FC Tokyo Shimoda Masahiro as senior advisor, and 39-year-old midfielder Daisuke Matsui as new team captain.

Binh said Saigon FC enjoyed a strong partnership with J-League clubs, which helped him bring over Japanese professionals and players from whom to learn.

“In the management and operation of Saigon FC this year, we will apply the Japanese culture of working. Through football we want to become a cultural bridge between Vietnam and Japan,” he said.

He added local players would also have the opportunity to receive training in Japan.

Thanh, who remained as an advisor to the club, said: “Japanese players have adjusted well in the team. We hope the latest additions would help Saigon FC achieve great results during the next V. League 1 season.”

The new season is expected to kick off at 6 p.m. on Friday, with the first match between Duoc Nam Ha Nam Dinh and Hanoi FC at Thien Truong Stadium.

Administrator - 17 November, 2020 0
Geovane Magno decided not to extend his contract with Saigon FC to sign with Hanoi FC as a free agent.

Administrator - 4 July, 2020 0
The 2020 season of the Vietnam Basketball Association league has been moved to the end of this year.