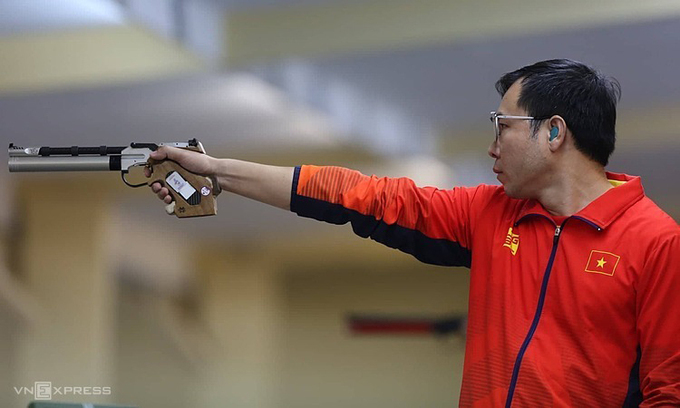 Shooter Hoang Xuan Vinh, Vietnam’s first Olympic gold medalist, will not participate in SEA Games 31 to focus on his target of qualifying for Tokyo Olympics next year.

“SEA Games 31 should be a chance for young athletes to prove themselves. I won’t participate in this event because I have to put all of my focus into qualifying for the Olympics,” Vinh told local media on Monday.

According to the veteran sports shooter, he is still training hard every day to prepare for Olympic qualifiers, set to commence next year.

“My dream is to compete at the Olympics once more,” Vinh, 46, said.

Vinh’s statement reaffirmed that from the Vietnam Shooting Federation in May that he would skip the Southeast Asian tournament to focus on the global one.

In addition to training, Vinh is also coaching the military shooting team.

Vinh participated in the 2012 and 2016 Summer Olympics, winning in the latter a gold medal in the 10-meter air pistol and silver in the 50-meter pistol events, becoming the first-ever Vietnamese to win an Olympic gold medal.

Vietnam will be the host of SEA Games 31 next year, with shooting one of its main strengths. The absence of Vinh would cause certain difficulties for the national shooting team on the path to winning SEA Games gold.

Last year in the Philippines, both failed to win gold, with Vinh winning just one silver medal after losing to Thailand’s Pongpol Kulchairattana.

Administrator - 9 September, 2020 0
Filip Nguyen can still play for Vietnam since he did not actually play for the Czech Republic on Tuesday and was merely in the reserves.