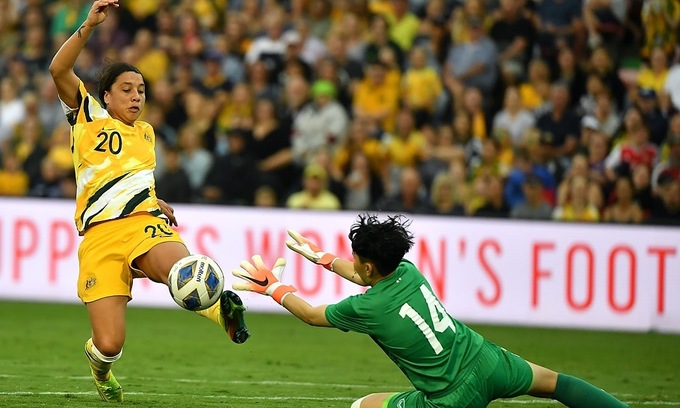 Vietnamese goalkeeper (14) attempts to block an attack from Australia in the first leg of their Olympic playoff in Newcastle, March 6, 2020. Photo courtesy of Vietnam Football Federation.

Le Hoai Anh, general secretary of the Vietnam Football Federation (VFF), said Saturday morning: “For the safety of the individuals playing the match, we have decided to have the match closed to fans, following up on our previous decision of not issuing tickets. Only official invitees and staff will be allowed inside, as per FIFA regulations.”

The federation’s decision came after a 26-year-old woman in Hanoi tested positive for the Covid-19 causing virus Friday night after returning from Europe, marking the 17th infection in Vietnam. The nation had gone 22 days with no new infection till then.

The second leg of the 2020 Olympic qualifer will be held at the Cam Pha Stadium in Quang Ninh Province, a three-hour drive from Hanoi, on March 11. Quang Ninh itself confirmed four Covid-19 cases on Sunday, who were foreign tourists sharing the flight with the Hanoi patient.

Vietnam’s Olympic dream has become more distant after they were thrashed 0-5 in the first leg in Newcastle Friday.