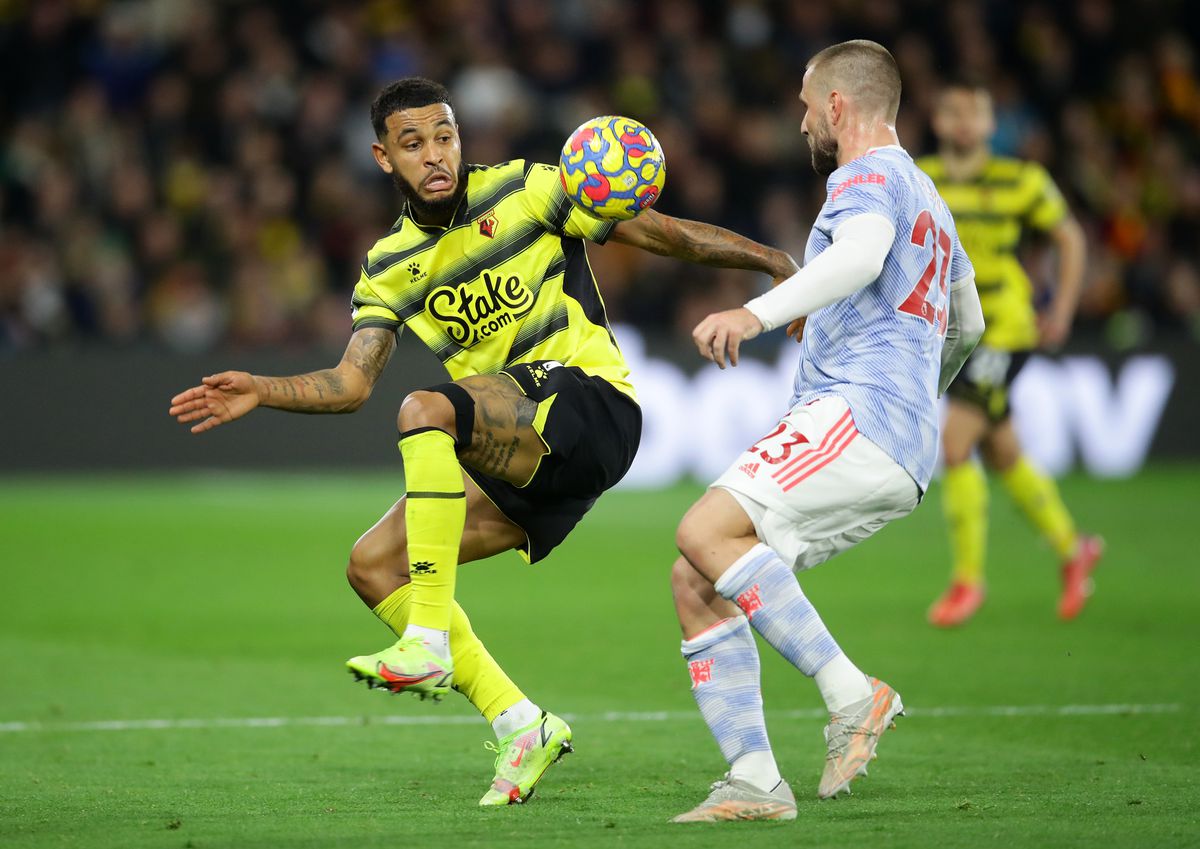 The visitors were punished for a ragged first-half display and after a brief fightback they capitulated horribly at the end after defender and captain Harry Maguire was sent off.

Joshua King and Ismaila Sarr were both on target for Claudio Ranieri’s side in the first half, while Sarr also had a twice-taken penalty saved by David De Gea, who later described United’s display as a nightmare.

Substitute Donny van de Beek inspired a revival after the break and halved the deficit in the 50th minute but Maguire’s clumsy tackle that earned him a second yellow card with 20 minutes remaining summed up their day.

Watford made absolutely sure of a crucial win with a grandstand finish as stoppage-time goals by substitute Joao Pedro and Emmanuel Dennis sparked noisy celebrations from the Vicarage Road faithful.

It was a dreadful capitulation by United who face a crucial week with a Champions League tie against Villarreal before a trip to table-topping Chelsea next weekend.

They are in seventh place with 17 points, 12 behind Chelsea, while 16th placed Watford have 13 points from 12 games.

The almost endless debate about Solskjaer’s position at Old Trafford was muted during the international window, but the volume will be turned up again after another hammering.

His creaking side have now let in 15 goals in their last five league games and while there was no outpouring of anger from their supporters, they left shaking their heads.

“There’s not much to say. It was embarrassing to see Man United play like we did today,” the Spaniard said. “It’s not acceptable, the way we were playing and doing things.

“It’s easy to blame the manager or the staff but sometimes it’s the players. We need to show much more than we are doing.

“It was hard to watch the team playing today. It was nightmare after nightmare. It’s not acceptable.”

Watford were far more eager than a lacklustre United side in the first half and should have been ahead early on when Scott McTominay bundled King over to concede a penalty.

Sarr’s kick was saved by De Gea before Kiko Femenia turned in the rebound, but the kick had to be re-taken due to encroachment. De Gea then saved Sarr’s second effort.

It was a temporary reprieve though, as King put Watford ahead in the 28th minute from close range before Sarr made amends with a thumping finish on the stroke of halftime.

United’s fans chanted van de Beek’s name at halftime and the Dutch midfielder duly appeared after the break for only his third league appearance this season.

He ducked down to head in United’s response in the 50th minute, after Cristiano Ronaldo’s head met Jadon Sancho’s cross.

For a while United were energised and Ronaldo was denied an equaliser by Ben Foster before having a goal ruled out. But when Maguire felled Tom Cleverley after getting himself in a tangle for a second yellow, the visitors crumbled.

Pedro slammed home a shot after being denied by De Gea seconds earlier, before Dennis rubbed salt into United’s wounds with another drilled finish.

Administrator - 8 December, 2021 0
Following their fair share of wins and losses in the previous two encounters with the Vietnamese national basketball team, coach Phan Thanh Canh’s unique tactic helped Danang Dragons dominate most of the play and score a surprising victory in the two sides’ third meeting.

Administrator - 23 September, 2021 0
BUENOS AIRES -- Lionel Messi scored a hat-trick to give Argentina a 3-0 win over Bolivia in a World Cup qualifier on Thursday, lifting him above Pele as South America's top international scorer with 79 goals.