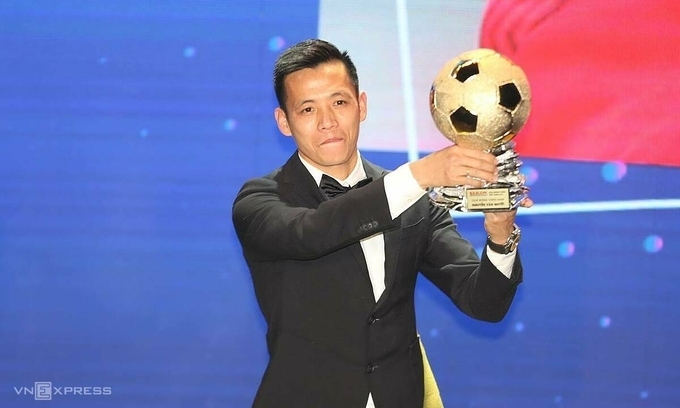 After scoring the Best Young Player award in 2010 and 2011, along with the Silver Ball in 2014 and 2015, the Hanoi FC captain finally got his hands on the Golden Ball. He received 526 points from coach, expert and journalist votes. On Quyet’s heals are Viettel FC defenders Bui Tien Dung (162 points) and Que Ngoc Hai (124 points).

“This is a very special day for me. Ten years ago, I won the Best Young Player award and now I’m holding the Golden Ball for the first time,” Quyet said.

The 30-year-old was first slated to receive the Golden Ball in 2016 after winning the V. League title with Hanoi FC and performing well for the national team. But due to an early season fine for a referee altercation, Quyet was excluded from the nominations.

A year later, in the last minute of the season finale, Quyet lost his cool and elbowed an opponent in the face, again missing out on the award.

In 2018, despite winning the V. League title, Quyet was overshadowed by Nguyen Quang Hai in the U23 AFC Championship that helped Vietnam finish second. A year later, Quyet captained Hanoi FC to win a Super Cup, National Cup and V. League treble. Hanoi also reached the interzone AFC Cup semifinals. But with his absence from the national team that year and Do Hung Dung’s stellar performance in SEA Games 30 that helped Vietnam win gold, Quyet was once again sidelined.

His efforts finally paid off during V. League 2020, with Quyet playing a full 20 games for Hanoi FC. On average, he made 42 passes per match, with a success rate of 76 percent. He also contributed to 20 out of 37 Hanoi goals and won the Best Player of V. League 2020 prize. With no international competitions in 2020, domestic league performance served as the main criteria for awarding the Golden Ball.

The Vietnamese Golden Ball is a prestigious annual award given to outstanding individuals since 1995. The voting process is similar to the famous Ballon d’Or of France Football Magazine. Midfielder Pham Thanh Luong of Hanoi FC holds the record, having won the prize four times.

Administrator - 17 January, 2021 0
The Friends of Vietnam Heritage will hold an excursion to Ha Mo Village in Hanoi’s suburban district of Dan Phuong on January 23.

Administrator - 15 August, 2020 0
LIVERPOOL, England — Liverpool’s players finally got their hands on the Premier League trophy on Wednesday in a muted presentation ceremony in front of an empty Kop after a thrilling 5-3 victory over Chelsea in their last home game of the season.