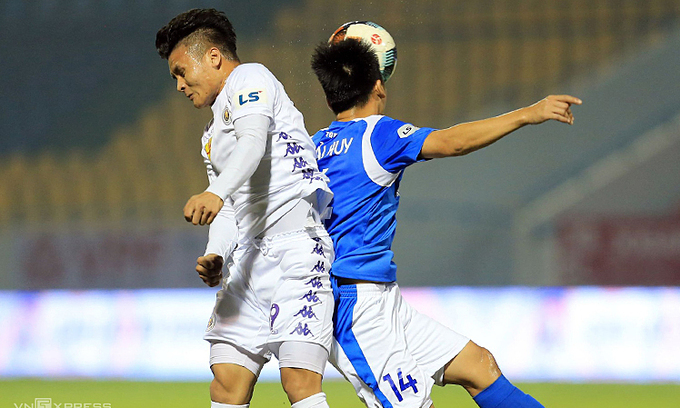 Nguyen Quang Hai (L) of Hanoi FC and Nguyen Hai Huy of Than Quang Ninh in an effort to claim the ball in a V.League match, March 15, 2020. Photo by VnExpress/Viet Cuong.

V. League 1 will be discontinued until April 15, with all games to be played in northern Vietnam.

In case the Covid-19 situation worsens, the tournament would occur from May 1 to June 28.

VPF plans to relocate all remaining V. League 1 first leg matches to northern Vietnam. There are currently seven clubs in the north, four in the central region and three in the south. Based on the number of teams in each region, VPF decided it’s best to host the games in the north where the majority of teams are located.

Accordingly, all clubs will spend less on travel expenses and have enough time to rest between fixtures. Each will have about three to four days off before playing the next round.

This option will assure the tournament concludes on time as well as gives players more field time, especially national team players, who will compete in World Cup 2022 qualifiers as well as AFF Cup at the end of this year.

VPF affirmed the 2020 V. League 1 will welcome spectators back to stadiums as soon as the pandemic ends. Clubs will have time to supply feedback to VPF about the plan until March 28.

V. League 1 has concluded two rounds so far, both played without spectators.

‘Not on pitch but on console’: Euro 2020 kicks off without footballers

Exhibition has nostalgia for Hanoi

Administrator - 18 March, 2020
0
An exhibition entitled Nostalgia for Hanoi’s Streets recently held in Hanoi depicts the city from the early 19th century to the mid-20th century.

Administrator - 21 March, 2020
0
With spring descending on Hanoi the famous local flower Hoa Sua, also known as the Dalbergia bouruana gagu flower, can be seen blossoming throughout the capital and serving to bring a pleasant sight for local people.

Vietnam to suspend all South Korea flights from March 5

Administrator - 18 March, 2020
0
Vietnam Airlines will temporarily suspend all of its South Korea flights beginning March 5 over concerns about the novel coronavirus outbreak, the national carrier said in a statement posted on its website.

Prices of face masks fall steeply due to plentiful supply