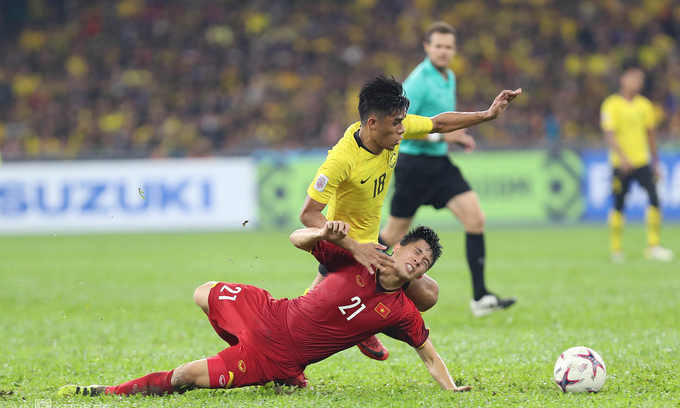 Vietnam (in red) play Malaysia in their first-leg encounter at the World Cup qualifiers on October 10, 2019. Photo by VnExpress/Duc Dong.

For different reasons, a victory over Malaysia is a must for Vietnam in their game Friday.

Besides the eight group winners, the four best runners-up will advance to the final round of World Cup qualifiers. With the withdrawal of North Korea from the tournament, their results from all matches in the second round already played were declared null and void.

Therefore, after the second round concluded, the results of matches between second- and fifth-placed teams in the remaining groups would also not be counted in order to have a balanced comparison between all group runners-up and alleviate any possible imbalance between the seven qualifying groups caused by North Korea’s withdrawal from group H.

The UAE understand more than anyone that even when they win the next game against Indonesia, it would be meaningless if they lose or draw against Vietnam in the last match on June 15. Should this happen, the UAE would finish second while their match results against Indonesia are nullified, which means they would only have nine points and face an uphill struggle trying to advance.

Thus, the UAE’s top priority will be their match with Vietnam next Tuesday. Chances are they will field their reserve squad when playing Indonesia so key players could save their stamina and prepare for the Vietnam clash.

For that reason, Vietnam’s most important game will be with Malaysia on Friday, not the UAE, since the latter is a much stronger opponent. The UAE have the home advantage plus better physique and stamina than Vietnam. Furthermore, the team are on high form after beating Malaysia 4-0 and Thailand 3-1

If the Golden Dragons can beat Malaysia, they only need to draw with the UAE to advance. Any other results would force the team to beat the UAE in the last game, which is a hard task.

Three points from the Malaysia clash would help Vietnam plenty even if they lost to the UAE. Should this occur, Vietnam would peak at second with 11 points. Compared to runners-up in other groups, Vietnam’s chance to advance will be 90 percent.

Of course, Malaysia know this as well. They must win the game against Vietnam to retain their chance of advancing. A loss in this game would mean an end to their dreams.

Both teams will enter the game under must-win pressure. Malaysia have a slight advantage as all their players are fit. Two key Vietnamese midfielders, Nguyen Tuan Anh and Nguyen Quang Hai, will be absent due to injury and suspension.

The game will kick off on Friday at 11:45 p.m. (Hanoi time) and be reported live on VnExpress International.