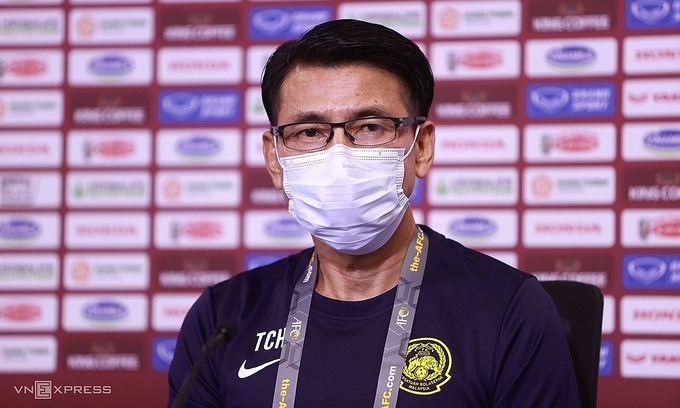 Malaysia coach Tan Cheng Hoe speaks at a press conference ahead of the World Cup qualifier between Malaysia and Vietnam, UAE, June 10, 2021. Photo by VnExpress/Lam Thoa.

Coach Tan Chang Hoe and forward Guilherme de Paula of Malaysia have both expressed their confidence ahead of the match against Vietnam in their World Cup qualifier on Friday night.

Tan believes Malaysia can leave Al-Maktoum stadium with a positive result thanks to his team’s careful preparation and the absence of Vietnam’s key midfielder Nguyen Quang Hai.

“I have seen Vietnam’s win over Indonesia. It was a very impressive performance as they won by four goals. Vietnam are very confident at the moment, but we have been training and preparing well for the past few days. Our players are ready to beat Vietnam,” said Tan in the pre-match press conference on Thursday.

“After losing to the UAE, we all understand the decisive implications of our meeting with Vietnam. We have been experimenting every day to find the best tactics, and I believe I have found the right starting line-up and tactics to get us a good result. I know our recent record against Vietnam has not been good, but I believe my players can surprise them when the two teams meet.”

Tan said Quang Hai plays an important role in Vietnam’s style of play and his absence is good news for Malaysia. “However, we are aware that Vietnam under Park Hang-seo are always unpredictable. Malaysia hence must always be ready and focused,” added Tan.

Hai, the scorer of the only goal when the two teams met in Vietnam in their first-leg encounter, will miss the Friday match after receiving his second yellow card of the qualifier campaign in the Indonesia game on Monday.

“We know what we need to do in the match against Vietnam because a positive result is very important to us. We also know Vietnam are a good team based on the action against Indonesia. Vietnam are very fast when making counter-attacks.We have to be good at using space, we need to stay focused, disciplined and score. If it can be done, it is not impossible we can win, he told Malaysian news outlet Sinar Harian on Wednesday.

He said Malaysia had learned from the defeat to the United Arab Emirates (UAE) and promised to perform better and give a happy result for their supporters.

After suffering a 0-4 defeat against the UAE on June 3, Malaysia’s only chance of advancing to the final 2022 World Cup qualifier is by being one of the five best group runners-up. To get themselves in such a position, Malaysia will have to beat both Vietnam and Thailand in their remaining matches and hope the UAE beat Vietnam on June 15.

Vietnam are on top of group G with 14 points while Malaysia have nine. To remain top of the group, Vietnam will also have three points in mind entering this game.

The match takes place on Friday, June 11, at 11:45 p.m. (Hanoi time) and will be reported live on VnExpress International.

Vietnam World Cup qualifiers to be broadcast on national television