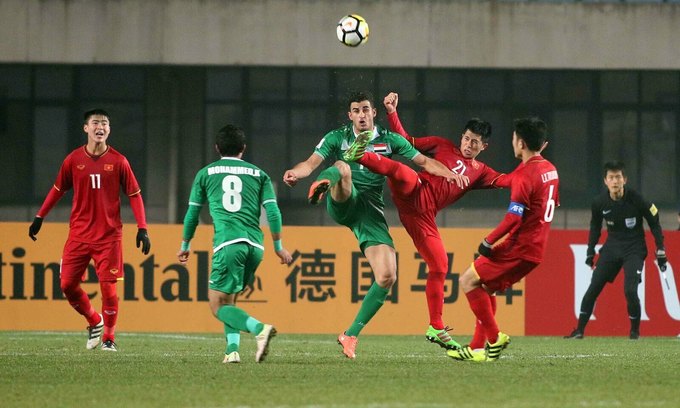 Vietnam (red) and Iraq during a quarterfinal of the AFC U23 Championship 2018 in China. Photo by VnExpress/Anh Khoa.

With Iraq pulling out, Vietnam are looking for a new team for its preparatory friendly ahead of next month’s World Cup qualification match.

According to a Twitter post Monday by the Home of Iraq Football, the official Iraq Football Association (IFA) account, the Lions of Mesopotamia will face Jordan instead of Vietnam in a friendly match on March 25.

IFA had suggested the cancellation earlier, citing fears of the new coronavirus epidemic, which has infected 16 people so far in Vietnam.

Vietnam and Iraq had agreed on January 31 on a friendly to be played at Saigon’s Thong Nhat Stadium or neighboring Binh Duong Province.

The friendly was in preparation for the second round World Cup qualification matches for Vietnam against Malaysia on March 31 and between Iraq and Hong Kong on March 31.

The Vietnam Football Federation (VFF) said earlier this month that such a cancellation would not constitute a breach of contract and would thus require no compensation.

Vietnam now needs to find another partner on its own, which is a difficult task as not many teams would want to go to Southeast Asia for football matches amidst the ongoing novel coronavirus outbreak.

VFF or coach Park Hang-seo might choose a Vietnamese club for the match, according to sources familiar with the matter.

As previously planned, coach Park and the national squad will be in Saigon on March 21. They are likely to have practice matches with local football clubs in the southern region.

Vietnam is currently at the top of its group in the World Cup qualifiers, followed by Malaysia, Thailand, UAE and Indonesia.

The ongoing coronavirus outbreak, first detected in China’s Wuhan City last December, has caused several Vietnamese football tournaments, including the V-League and the National Cup, to be delayed until March.

Vietnam declared the SARS-CoV-2 outbreak an epidemic on February 1. As of Tuesday, its global death toll had climbed to 1,873, predominantly in China; and confirmed infections topped 73,000. More than 12,000 patients have recovered.

The truncated year that was in Vietnamese sports