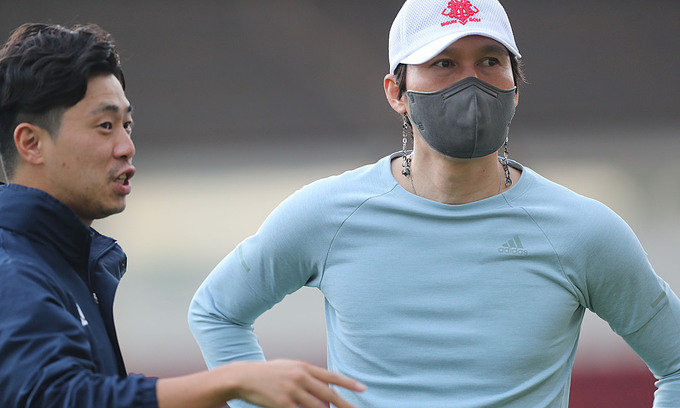 Park Choong-kyun is set to be the new coach of Hanoi FC as he appeared in a training session of the club on Saturday.

Hanoi was training for their next important V. League game with the table leader Hoang Anh Gia Lai (HAGL) on Sunday. The club’s current coach Hoang Van Phuc, along with Park, conducted the training session.

As a former footballer, Park had six appearances for the South Korean national team and took part in the Summer Olympic Games 1996. He started his coaching career in 2009, two years after retiring from playing. Before Hanoi, Park coached teams in China like Tianjin Quanjan and Tianjin Tianhai.

Park is said to have reached an agreement with Hanoi. He finished his two-week quarantine in Vietnam on April 10.

This is the second time the club, a five-time V. League champion, are changing managers this season after sacking Chu Dinh Nghiem and replacing him with former national team coach Hoang Van Phuc just this month.

Hanoi’s opponent HAGL have won seven consecutive matches, while the capital club is at sixth with nine points less. In this game, Hanoi will welcome back their skipper Nguyen Van Quyet after suspension, as well as the Brazilian striker Bruno Cantanhede after injury.

Vietnam is one of the top 15 teams in Asia

Administrator - 26 May, 2020 0
Vietnam is one of the top 15 teams in Asia and rank among the 100 strongest sides in the world, according to the latest FIFA Ranking for men’s football.