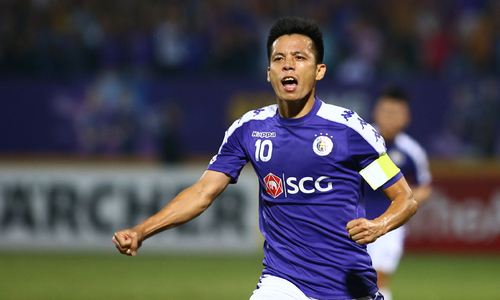 Nguyen Van Quyet (L) is the player with the best overall stats in V. League 2020. Photo by VnExpress/Lam Thoa.

Although his favorite position is attacking midfielder or second striker, Quyet still performed well as a left-wing midfielder throughout the season. On average, he made 42 passes in each game with a success rate of 76 percent.

Quyet also made 55 key passes in 20 games with a 53 percent success rate. On average, he made about 2.8 key passes per game. Following Quyet is central midfielder teammate Do Hung Dung who made fewer key passes (46) but enjoyed a higher success rate (59 percent).

Another notable stat is Quyet’s number of passes delivered into the box. The 29-year-old placed at number one with 196 passes. On average, he delivered a pass into the box every nine minutes with 47 percent accuracy.

Quyet spent 1,755 minutes on the field this season. Only Dung has played more minutes than Quyet, with 1,757. The 2019 Vietnamese Golden Ball winner placed fourth overall with 241 points.

In second place is star striker Nguyen Cong Phuong on 245 points, although he only played 12 games for HCMC FC this season, followed by Ugandan midfielder Moses Oloya of Hanoi (244 points).

The 2020 V. League Awards was held on Friday night with Quyet receiving the best player award.

Administrator - 19 May, 2020 0
National coach Park Hang-seo intends to stay back in Vietnam after his contract ends and open a football academy to nurture young talent.

Administrator - 27 May, 2020 0
The Vietnam Golden Ball (VGB) 2019 was won by Do Hung Dung for his sterling performances last year.