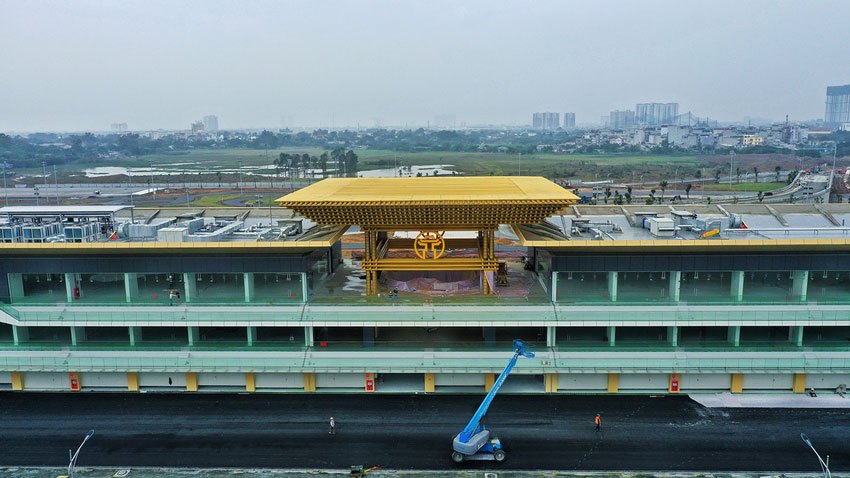 In a tantalizing sneak-peak of the newest circuit in F1, the photographs show the 300m pit building and part of the circuit itself, two-thirds of which is city roads – the other third having been built especially for the Grand Prix.

The Hanoi pit lane is deliberately “very, very short,” according to circuit designer Hermann Tilke, in order to encourage more than one stop during the race. The 5.6km circuit features 23 corners and has nine grandstands named after regions across Vietnam.

The design of the three-storey pit building has been heavily influenced by the city’s historic buildings, to reflect Vietnam’s “strong cultural legacy”.

“This is an important moment in the development of the Hanoi Circuit and another vital milestone in the lead up to Vietnam’s first ever Formula 1 race weekend,” said Vietnam Grand Prix Corporation CEO Le Ngoc Chi.

“Like the Imperial Citadel of Thang Long and the Pavilion of the Constellation of Literature which have inspired the Pit Building’s design, we hope this structure will become another iconic Hanoi landmark.

“With the track itself nearing completion and grandstands starting to go up as the event draws ever closer, the excitement levels for the Formula 1 VinFast Vietnam Grand Prix 2020 are rapidly growing. We are ready and we look forward to seeing you in Hanoi very soon.”

Tickets for the third round of the 22-race 2020 F1 season are still available for those who want a chance to witness F1 cars reach speeds of 335km/h at F1’s newest Grand Prix.

‘Not on pitch but on console’: Euro 2020 kicks off without footballers

Administrator - 23 April, 2020
0
The British Department of Health and Social Care has granted the CE marking and Certificate of Free Sale (CFS) to Vietnam’s test kits used in novel coronavirus disease (COVID-19) diagnosis, according to the Vietnamese government.

Administrator - 13 May, 2020
0
Secretary General of the ASEAN-Korea Center and former South Korean Ambassador to Vietnam Lee Hyuk has made major contributions to enhancing the relationship between Vietnam and South Korea.

Administrator - 18 March, 2020
0
With Tet just a week away, calligraphy produced on Pham Ngoc Thach Street is believed to bring luck and fortune to Saigon crowds.

Visiting a cafeteria on a scrap bus in Hanoi

Administrator - 19 March, 2020
0
NDO – Coming up with an idea of turning a scrap bus in into an environmentally-friendly café, Nguyen Duc Sam spent years to recycle abandoned items into a unique café that attracts a lot of interest from customers.

Administrator - 18 March, 2020
0
At noon on April 30, 1975 among some officials and soldiers of the Southern Liberation Army in  Saigon Radio’s studio, there was a special man who witnessed the historical moment when President of the Republic of Vietnam Duong Van Minh and the cabinet of the Saigon administration broadcast the statement of unconditional surrender. He is Nguyen Huu Thai, former President of the Student Association of Saigon.