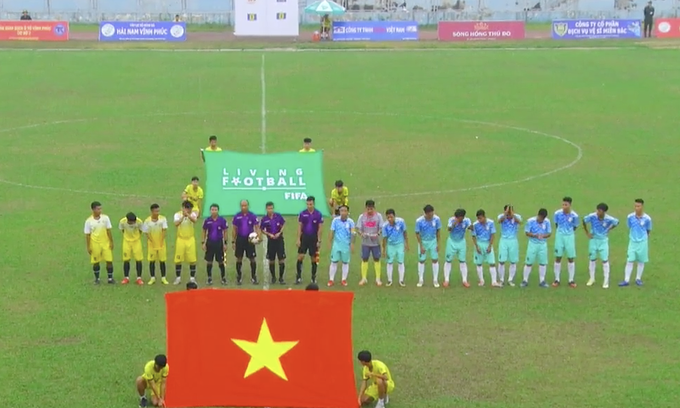 A V. League 3 match had to be canceled on Friday when one of the teams turned up with just four players.

Newly formed Son La FC was in fact supposed to make their V. League 3 debut at the Tam Dao Stadium in Vinh Phuc Province against Luxury Ha Long FC in Group A.

But after the opening ceremony match officials found that Son La did not have enough players for the game.

When registering for the league, Son La had informed the Vietnam Football Federation (VFF) it would have 20-22 players and in fact sent a list of 18 it claimed to have signed up already.

However, only eight people in that list had completed transfer procedures.

The VFF decided to give the club extra time to fill their roster, but by match day not only had Son La not done so but also only four out of the eight qualified players showed up.

So when the two teams came out and greeted the spectators, the referee blew the whistle to call off the match.

“Each team must have at least seven players for the game to take place,” VFF General Secretary Le Hoai Anh told VnExpress.

He is waiting for the report from the organizers and said Son La would face sanctions.

Luxury Ha Long go down into the books as having scored a 3-0 victory, he said, adding Son La need to find players and complete all necessary steps before their next match against Bac Ninh FC on November 10.

Ten teams divided into two groups are playing the V. League 3 in the northern Vinh Phuc Province and southern Ben Tre Province. The top two teams will get promoted to V. League 2 next year.

Administrator - 7 November, 2020 0
Coach Chu Dinh Nghiem of Hanoi FC will be absent in the most crucial game of the season for overreacting against a referee.

Administrator - 4 November, 2020 0
The next VnExpress marathon in beach town Quy Nhon is scheduled for June 2021, with registration open from November 9.