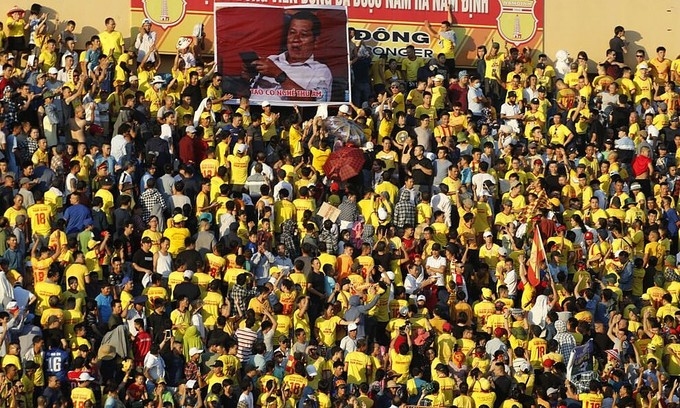 Duoc Nam Ha Nam Dinh have been penalized for their supporters mocking the head of the country’s referee division during a V. League match.

The Vietnam Football Federation (VFF) has fined the Nam Dinh club VND15 million ($647) for inappropriate behavior of fans in the stand during a July 23 match against Becamex Binh Duong.

During the match, Nam Dinh fans in the stands held up a large banner with a picture of Duong Van Hien, head of V. League’s referee division, with the caption: “I’m only good at recording.” This referred to an incident in 2018, when Hien recorded a meeting between VFF, Vietnam Football Joint Stock Company (VPF) and the referee division over personnel issues, and the meeting minutes were leaked to the press. Hien confirmed later that he did record the meeting for self-protection, but insisted he was not the one who leaked the content.

Nam Dinh fans chose to vent their ire on Hien because of their frustration with the clubs results being directly affected by poor refereeing. They have demanded many times that Hien step down from his position. The Nam Dinh head coach had also asked Hien to resign after the club suffered many unfair decisions from the referee in past games.

This is the second time Nam Dinh is being fined for fans’ behavior in the V. League 2020 season. When the tournament returned in June, the club was fined VND15 million for letting fans throw water bottles onto the field and interrupting the game with Viettel FC.

Domestic football, including the V. League, was suspended last month after Covid-19 resurfaced. Authorities are considering bringing the tournaments back next month if the pandemic is contained.

The village with 20 old French-style villas

Administrator - 25 September, 2020
0
More than 100 years ago, Nha Xa village in Duy Tien district, Ha Nam province was famous for silk weaving and silk exports, which turned the village into one of the richest in northern Vietnam.

Administrator - 25 September, 2020
0
After two months of combating COVID-19, life in Da Nang has returned to normal and the city is ready to welcome visitors. However, preventive measures have been intensified to ensure safety for tourists.