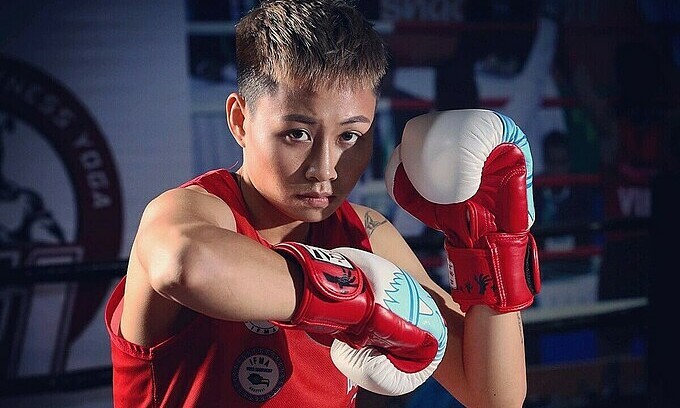 To Vietnam’s Bui Yen Ly, world Muay Thai championships have come with a lot of grit, pain and sacrifice.

The Muay Thai star admitted quitting did cross her mind due to tough training regimens, including going on a weight-loss diet to drop 11 kg in two months. But she persevered to bring home medals at both regional and international tournaments.

Earlier this month, Ly was busy arranging over 30 medals and memorabilia. The 25-year-old cherishes each award, accumulated during 10 years pursuing Muay Thai.

Holding the gold medal she won at the International Federation of Muay Thai Amateur (IFMA) Senior World Championships in Thailand in July 2019, Ly admitted it was one of the toughest prizes to bring home.

Ly had to take on Ekaterina Gurina, a tall Russian fighter, following three prior matches, which she managed to dominate. That same year, she was also awarded the Best Female Boxer title from IFMA.

“After years of receiving punches, I was recognized internationally,” she said.

According to IFMA, Ly also bagged Muay Thai gold medal at SEA Games 2019 in the Philippines, bronze at 2019 Asian Muaythai Championships in UAE and silver at 2018 IFMA World Championship in Mexico.

Though passionate about martial arts since childhood, becoming a Muay Thai boxer happened by chance. Ten years ago, she participated in a small tournament in her hometown of the northern Bac Giang Province and accidentally caught the eye of coaches training a Hanoian Muay Thai team. They called her a “raw diamond” because of her wide physique, powerful punches, and physical strength.

At the time, Muay Thai was not popular, many believing it to be a cruel discipline that “left the opponent collapsed on the floor.” Ly’s parents were no exception, but seeing their child’s passion, could not help but let her pursue her dream.

In the early days, she was prone to fainting, nosebleeds, blistered gums, and bruised hands and feet. However, the more she practiced, the more she fell in love, learning to accept the pain.

“My goal was to land at least one punch even though I would end up losing.”

In order to produce strong kicks, she practiced on truck tires. On average, she landed about 500 kicks per session.

“I kept practicing punching so I could hit the target even with my eyes closed.”

The boxer commenced fasting and rigorous sweat-based training to drop weight. At the world championship in 2019, Ly went from 62 kg to 51 kg in two months, costing her a certain amount of energy.

Ly also practiced with sandbags and dumbbells to increase the power of her attacks and did push-ups and barbells to tone her abs.

Muay Thai involves the hands and fists like boxing, legs like karate and rotation and locks such as Judo and Aikido. Each training session can burn over 1,000 kcal, affording athletes balance, flexibility and superior fitness.

The 1.7-meter tall girl weighing 58 kg with short hair was often mistakenly identified as a boy when outside.

“I don’t pay too much attention to my appearance. The important thing is that it helps my performance. It is difficult to have long hair when competing,” Ly shared.

In November 2010, she participated at the national competition in the 48 kg weight class, winning the first gold medal of her career. Since then, she has experienced a series of winning-streaks both in Vietnam and abroad, to major acclaim.

Ly’s secret lies in always researching her opponents before deciding on a game plan. At international tournaments, for instance, her opponents are often physically stronger, requiring greater defense than offense.

“Actually, I find fasting much more difficult than competing. I get hungry after practice and must eat to regain strength. But I will gain weight if I eat too much since all boxers have to be weighted prior to a match. Boxers are automatically disqualified should they exceed the limit,” Ly explained.

Some have advised Ly to drop Muay Thai and get hitched. However, her sights are firmly set on tournaments featuring higher weight classes.

“My passion multiplies whenever I win another medal.”

Currently, Ly is focusing on SEA Games 2021, scheduled from November 21 to December 2 in Hanoi. Though she had previously won two SEA Games gold medals in Myanmar and the Philippines, next year’s tournament will be more special since she will be fighting on home turf.

“My wish is to hold up the gold medal, sing the national anthem and watch the red flag with a yellow star soar over my homeland,” Ly said.

A glimpse of wintery festival on Bac Ha Plateau

Administrator - 25 November, 2020 0
A wintery festival has been held on Bac Ha Plateau of Lao Cai province, northern Vietnam, to introduce its tourism development potential and specialties.

Vietnam is on the verge of gender inequality

Administrator - 25 November, 2020 0
Vietnam is on the verge of gender inequality as a result of gender-biased sex selection since many families in the country still favor boys over girls, resulting in more than 40,000 baby girls unborn every year.

Third ASEAN Graphic Arts Exhibition to be held in Hanoi

Football match scrapped as team turn up with 4 players

Administrator - 8 November, 2020 0
A V. League 3 match had to be canceled on Friday when one of the teams turned up with just four players.