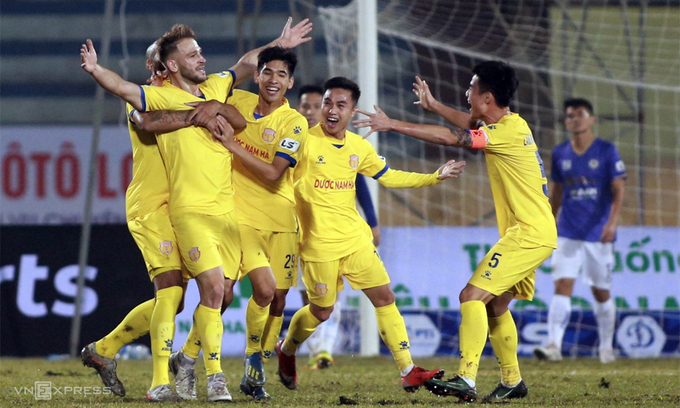 Nam Dinh FC players celebrate their win over Hanoi FC in the opening game of V. League on January 15, 2021. Photo by VnExpress/Lam Thoa.

The opening round of V. League 2021 was packed with surprises, frustration and disappointment, with ants slaying elephants.

The earliest game of the season on Friday between Hanoi FC, V. League runners-up and Nam Dinh FC, which escaped relegation last year, ended with a shocking result. Before the match, no one had thought Nam Dinh would tear Hanoi apart with three goals to nil.

The heat from Nam Dinh’s home stadium Thien Truong had poured pressure on the guests. Over 20,000 fans came to watch the game, an impressive and rare scene during the Covid-19 pandemic. But among the spectators, only a very small proportion were Hanoi FC supporters, with Nam Dinh famed for having one of the most enthusiastic fans in the country.

With Nam Dinh’s tough stance, Hanoi encountered many difficulties. Their key midfielder Do Hung Dung left the pitch early after suffering an injury from a tackle.

When still trying to find a way through the opponent’s defense, Hanoi conceded two goals in just three minutes, from a counter attack and corner. Their new foreign attackers also failed to impress. Nam Dinh finished the game in the last minute of the second half with another goal.

On Saturday, defending champions Viettel FC also suffered a 0-1 defeat to Hai Phong FC despite playing at home. Hai Phong found the post three minutes into the game, followed by a series of chances to score. Only the talent of goalkeeper Bui Nguyen Manh could save Viettel from conceding. The only goal of the game came in the 16th minute, just enough for Hai Phong to pocket three points.

A day later, another underdog team got the sweet taste of victory. SHB Da Nang went up against HCMC FC, a club that splashed out in the transfer window to recruit expensive foreign players and a new Brazilian coach. But Da Nang started the game with high energy by constantly threatening HCMC’s goal. After several missed chances, in the 17th minute, national team forward Ha Duc Chinh opened the scoreboard for Da Nang. With the early goal, Da Nang slowed down the pace and strengthened its defense to keep the score 1-0.

On the same day, Hoang Anh Gia Lai (HAGL) clashed with Saigon FC in a much anticipated game. While HAGL had made certain additions to their squad, noticeably new coach Kiatisuk Senamuang from Thailand, Saigon employed Japanese football philosophy with its new J1 League recruits. HAGL’s three defenders left many holes for their opponents to exploit. As a result, they conceded in the 40th minute. In the remaining time, HAGL failed to equalize, giving Saigon the start they needed for the season.

During Becamex Binh Duong’s match with Thanh Hoa FC at home Saturday, American forward Victor Mansaray of the host clashed with the referee, who awarded him a yellow card for trying to buy some time in the last minutes of the game. The incident nearly ended in violence were it not for his restraining teammates.

In the two remaining games, Song Lam Nghe An drew 1-1 with the newly promoted Binh Dinh FC, while Hong Linh Ha Tinh lost 1-2 to Than Quang Ninh. Ha Tinh could have won if their Brazilian forward Claudecir did not miss both penalties awarded to the club.

Besides the match between Nam Dinh and Hanoi that ended 3-0, the remaining six opening games of V. League 2021 all enjoyed close results. While there are clear differences between clubs, the underdog mentality has made matches more balanced and unpredictable.

Administrator - 5 March, 2021 0
Vietnam got through 2020 as one of only a few to fulfil the dual goals of containing the COVID-19 pandemic and developing its economy. This achievement can be attributed to the determination and effort of all sectors, most notably science and technology.

Administrator - 5 March, 2021 0
The Hanoitimes - Vietnam is one of just three countries in the top ten Happy Planet Index rankings with an Ecological Footprint that is small enough to be considered environmentally sustainable.

Magical glow of lanterns in Hoi An ancient city

Administrator - 5 March, 2021 0
Hoi An has long left an illuminating impression on visitors thanks to its twinkling lanterns in different shapes and sizes, hung above a network of streets, temples, narrow lanes and alleys along the Thu Bon river.