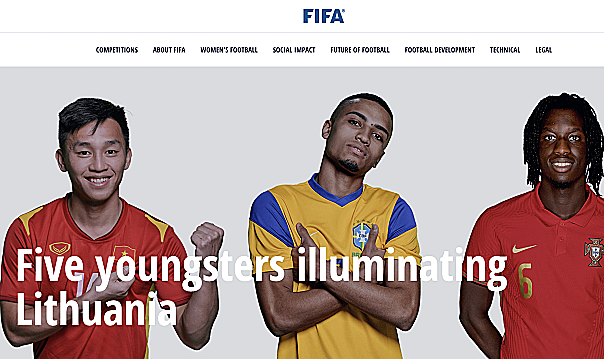 Nguyen Van Hieu (L) is celebrated among other players at Futsal World Cup on FIFA’s website. Photo by FIFA

“Ready for an astonishing fact? When the last FIFA Futsal World Cup took place, Van Hieu had never even played the sport. He took it up in 2018, was a Vietnam international just 12 months later and is now dazzling at Lithuania 2021,” FIFA wrote.

In the game with Panama on September 16, Hieu scored the decisive goal from a great solo effort to help Vietnam win 3-2.

“The winger who looks like a schoolboy had old pros feeling their age on Matchday 5. Van Hieu thwarted a Panama attack with an excellent tackle inside his own half, whizzed the length of the court, shrugged off two challenges, rounded the goalkeeper and cut the ball from an acute angle,” FIFA described Hieu’s goal.

“Van Hieu is the talent of Vietnamese futsal. His playing philosophy is very up-to-date. He is a very promising player,” Giang said.

On Wednesday night, Vietnam will play world number four Russia in the round of 16.

Administrator - 14 June, 2021 0
Vietnamese State President Nguyen Xuan Phuc extended his congratulations to the national men’s football team for their convincing 4-0 victory over Indonesia in the second round of FIFA World Cup qualification in the UAE on Monday night.