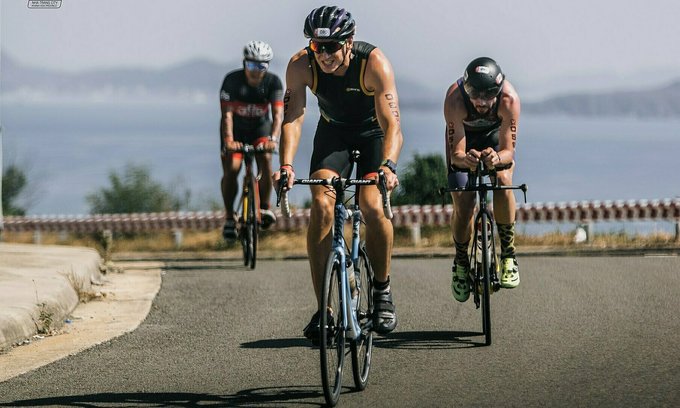 Athletes participating in Challenge Vietnam in Nha Trang, in July 2019. Photo courtesy of the event organizer.

The third edition of Challenge Vietnam offers triathletes a chance to run, bike and swim in Nha Trang, Khanh Hoa Province, in September.

The triathlon, consisting of a 1.9 km swim, 90 km cycle and 21 km run, will be held in the central coast town on September 13. The swim is beginner-friendly with a cut-off time of 70 minutes, while the run is mostly flat apart from a couple of short and easy hills and a bridge. The cycling route includes a steady mix of cliffs, flats, and local roads.

Last year, the event also took place in Nha Trang during July. Organizers stated online the event had been moved to September since the average sea temperature around this time of year is more enjoyable for athletes at about 28.3 degrees Celsius.

Challenge Vietnam was named the Best Inaugural Long Distance Triathlon in Asia in 2016 and Best Overall Race in Asia in 2019 by AsiaTri, a triathlon related news site specific to the Asian region.

The event attracted lots of foreign triathletes, including those from Australia, New Zealand, Taiwan and Costa Rica.

Administrator - 17 January, 2021 0
Vietnam continues to be a top 10 country for retiring abroad, holding on to its spot in the latest Retirement Index.

Administrator - 17 January, 2021 0
Travel firms have suggested making Covid-19 insurance compulsory for all inbound and outbound travelers as one of the solutions Vietnam needs to apply after it receives foreign travelers again.

Vietnam pro basketball league to start in May with extra team

Administrator - 18 March, 2020 0
The professional Vietnam Basketball Association league will feature an additional team this year when it begins in May.

Saola might be Vietnam’s mascot for 2021 SEA Games, Para Games

Administrator - 30 September, 2020 0
The General Department of Sports and Physical Training has suggested making the saola the mascot of the 2021 SEA Games and ASEAN Para Games.